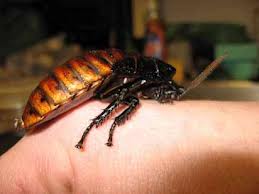 An American,who was declared victorious in cockroach- eating contest,met with death after gulping live bugs in front of contestants.

Edward Archbold, 32,a resident of Florida,turned sick moments after the contest ended and he collapsed in front of the venue of the contest-the Ben Siegel Reptile Store in Deerfield Beach, Florida-according to a report published by the Mirror.

None of 30 other contestants, who had swallowed more than a dozen of cockroaches each,had fallen ill.But Archbold was reportedly rushed to a hospital where he was declared dead.

Though the post mortem report was still awaited,store owner Ben Siegel expressed shock over his death.“We feel terribly awful,”Siegel is quoted having said adding:” Archbold did not appear to be sick before the contest.”

The same report quoted Siegel’s lawyer claiming that all contestants had signed waivers “accepting responsibility for their participation in this unique and unorthodox contest.”