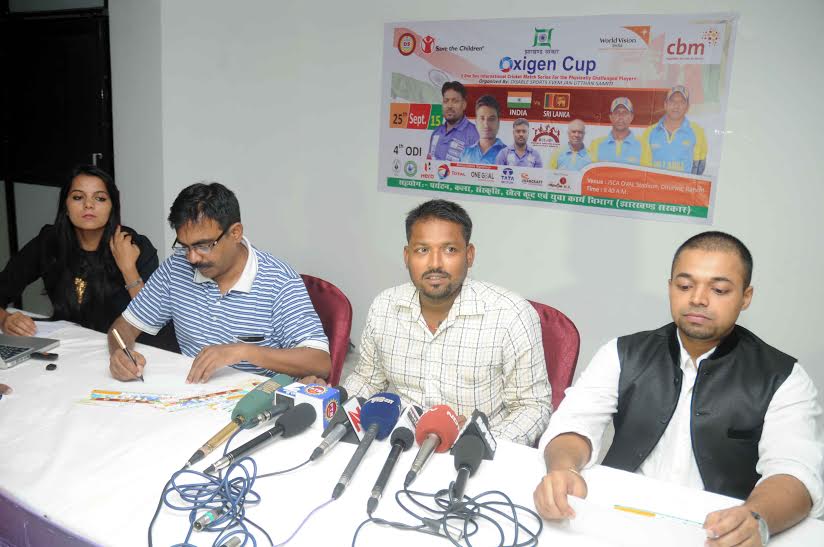 Disable Sports Evam Jan Utthan Samiti, a member of Disabled Sports
Society (India),backed by CBM South Asia, a prominent organization of the disability sector along with Jharkhand Government, World Vision and Save the Children are main sponsor of the Programme. Radio Mantra is its radio partner.

The match in Ranchi,co-sponsored by CCL, Chotanagpur SanskritikSangh (CSS) and Hero,is organizing the 4th and concluding match of the “One Day Cricket Match” of “India- Sri Lanka bilateral series”.

Already,the teams of India and Sri Lanka have started coming to Ranchi.”We are ready to welcome the players.To do so,a team of organisers has been working hard”,said Rahul Mehta,an organizer who represents Chotanagpur Sanskritik Sangh in a joint press conference addressed by Team India of Physically challenged Mukesh Kanchan and Spokesperson Utkarsh Leo at Hotel Park Prime in Ranchi today.

Kanchan,a resident of Jharkhand,who carries physically challenged right leg,said that he is having a strong team.He said :”Though the Team Srilanka is no less strong,we are leaving no stone unturned to defeat them.”

The “One Day Cricket Match” of “India- Sri Lanka bilateral series is sponsored by top bodies including the Jharkhand government, CCL,Hero,World Vision and Save the Children.In addition,a popular web news portal jharkhandstatenews.com. Radio Mantra is its radio partner.

The one day match is bound to bring on surface the talents and problems ofphysically challeneged people and do its bit for social integration.”It is the celebration of their physical challenges overcome by them”,said spokesperson Utkarsh Leo.

Knachan may not be a swashbuckling cricketer but has worked hard to book a berth in the Indian cricket team for the physically challenged.“I was young when my parents identified my disability,” he says. “They noticed that I was not moving my left leg like my other leg. Immediately they took me to doctor but were told I will have to live with the deformity for rest of my life,” he says.

When he was a child his friends in the neighbourhood neglected him. “I stayed indoors watching cricket on television. That was the time I gathered a lot of information about the game. I watched a lot of international cricket. My cricketing knowledge helped me to befriend my classmates in school,” he says.

Physical deformity in no way curtailed his passion for cricket. Amazed at his sound batting technique, his classmates accepted him as part of their cricket team. “I was studying sixth standard then. After watching my friends play a friendly cricket match at school, I suggested some corrections in their batting and bowling techniques. From then on I became one among them,” says Kanchan.

“Cricket for physically challenged is played according to International Cricket Council’s laws. The only concession is that a team is allowed to have two by-runners,” says Kanchan.