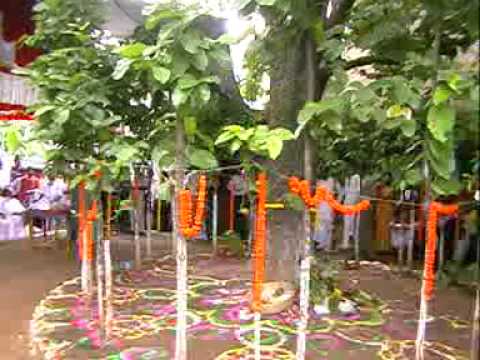 The Harmu ground is Ranchi saw hundreds of tribals offering prayers to the tree-Karam.

Many of them sang and danced while carrying and passing a branch of Karma tree.Subesequently,the after the branch was washed with milk and Handia(Rice Beer),it was raised in the middle of the dancing arena.

All these were part of rituals associated with celebration of the annual festival of tribals called Karma.It is being celebrated with pride and fervoby the tribals across Jharkhand

As per their tradition,Karma is celebrated in the month of August/September (11th moon of the Hindu month of Bhadrapad). It is a festival celebrated by mainly the Munda,Oraon, Baiga, Binjhwari and Majhwar tribes among others.

As it is celebrated across the state by the tribals going in the forest to collect fruits and flowers,they worshiped what they called ‘Karma Devi’( a goddess who is represented with a branch of Karam tree).

The branches are garlanded on the next day. Offerings of flowers, rice and curd are made to them. Red colored baskets filled with grains are placed before the branches.

Barley seedlings are distributed among the young people, who wear it on their heads. The branches are worshiped and their blessings sought. As per the legends of Karam Devi, she is believed to be the goddess of wealth and children.

During the dance they pass the branch of the tree, the men leap forward to a rapid roll of drums, while women dance with their feet moving in perfect rhythm to and fro.

The history of the festival is not much known. But local historians aver that it’s being celebrated since time immemorial. The legend behind the festival, according to anthropologist Harimohan (1972, as cited by JharkhandStateNews 2012), is:

Once upon a time there were seven brothers. They were busy in agriculture work. They had no time even for lunch and as such their wives used to carry lunch to the field daily. Once it so happened that their wives did not bring the lunch for them. They were hungry. In the evening they returned home without food and found that their wives were dancing and singing near a branch of the karam tree in the court-yard. This made them angry and one of them lost temper. He snatched the karam branch and threw it into the river. The Karam deity was thus insulted as a result of which the economic condition of their family went on deteriorating. They were starving. One day a Brahman (priest) came to them. The seven brothers narrated the whole story. On hearing it, the Brahman told them that the Karam Rani was angry and she must be appeased. If it was not done their condition would further deteriorate, the Brahman told them. The seven brothers then left the village in search of the Karam Rani. They kept on moving from place to place and one day they found the tree. Subsequently, they worshiped the it. Thereafter their economic condition started improving.

The message is simple: since the entire economy of the Adivasis was dependent on land, water and forest, trees that sustain the environment must be worshiped. Karma Dance is also one of the oldest dance form in India. This dance form is common to the many ethnic groups of India. Girls also pray for the safety of their brothers during the Karma Puja. Girls seeking blessings for their brothers is believed to be an extended version of the Hindu customs.