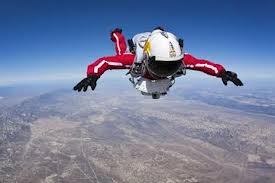 He did what no body had done in the past.Felix Baumgartner leapt from 128,000 feet (24 miles) above the Earth and calmly walked down to earth unaided after landing in a field in Roswell, New Mexico on Sunday night.

“Supersonic skydiver Felix Baumgartner was faster than the speed of sound when he hit mach 1.24 in terrifying plummet to Earth from 1,28,000 feet”,said the report.

Report quoted him saying:“When I was standing there on top of the world, you become so humble, you do not think about breaking records anymore,” the 43-year-old Austrian daredevil said afterward. “The only thing you want is to come back alive.”

Another report said:”The jump — during which “Fearless Felix” hit a top speed of 1,342 kmph, well above the speed of sound.With yesterday’s jump, Baumgartner, a former paratrooper, broke several records: fastest descent by a man outside a craft, highest free fall and the highest manned balloon trip.”

“The only record he fell short of breaking was longest free fall in terms of time. Baumgartner fell for 4 minutes, 22 seconds before activating his parachute, just shy of the 4:36 mark set in 1960 by retired Air Force Colonel Joseph Kittinger, now 84.”

In fact,just before the leap, Baumgartner was lifted to the sky in a capsule in a three-hour helium balloon ride.Initially,he looked like an astronaut and after th first minutes of the jump, he spun like a top before straightening out.

“Any foul-ups with his suit amid the minus-70 degree temperatures would have surely led to a grisly death. His feat was seen by a YouTube record of 7.3 million simultaneous viewers and broadcast live on 40 TV stations in 50 nations”,said a report.

Incidentally,this was not his first record.His first record was in 1999 for the lowest base jump ever from the hand of Christ the Redeemer statue in Brazil, which is 95 feet above the ground.

Later,in 2003, he completed the first winged ‘free fall crossing’ of the English Channel, leaping out of an aircraft and flying the with carbon wings.