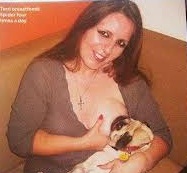 She did what many women can’t.Terri Graham,44,mother of two from California,claims that she had been gratifying her maternal instincts by breast feeding her 9 year old dog,a pug called Spider.

“Having Spider suckle on my boob means I finally feel complete and a better mother,” the Huffington Post quoted her as telling Closer magazine.

Reports said that this American lady in an interview to this magazine had claimed that Spider had developed a taste for breast milk in 2010 after licking the nipple of a bottle she had kept for her then-newborn son.”She says she has breastfed the dog for about 2 years’,said the report in Huff Post-Weird News.

The same report said:” A photo of the article about Graham was posted to a Reddit forum devoted to strange and outrageous news, where it quickly received more than 2,000 “upvotes” and rose to the site’s front page.Although the comments were riddled with jokes, one user pointed out that a British woman had reportedly breastfed her dog in 2010.

A psychologist interviewed for the magazine piece suggested that Graham seek therapy, but stranger incidents involving canines have occurred in the British Isles.”