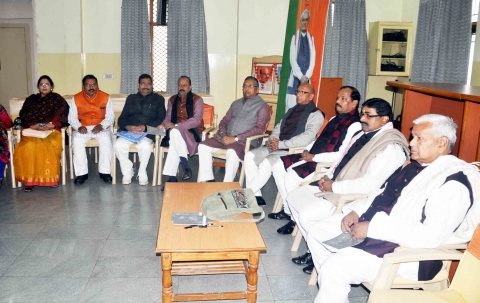 “Jharkhand is a mineral rich state.We have many mines and industries.But we don’t go beyond its natural resource as its lakhs of people remain poor.Now,we have initiated many moves to provide benefits to the people in rural and urban areas”,says Jharkhand Chief Minister Raghubar Das.

These remarks are significant since the state government is currently celebrating “Ek Varsh Seva Wa Prayas Ke…”(One year of service and effort…),for the first year in running,to mark the achievements recorded by the ministers and bureaucrats in clearing the projects and schemes during the past one year of the Raghuvar Das regime.

Has Jharkhand,as a State,learnt anything from its past which was literally flooded with scores of multi crore rupee scams -dealing with umpteen items such as fodder,coal,road,vegetable,agriculture and power?

Though no scam has surfaced so far,corruption is learnt to be prevalent in the corridors of the state bureaucracy evenas Rajiv Gauba,Chief Secretary and Amit Khare,Principal Secretary(Finance),who worked for almost ten hours every day,kept their fingers crossed.A beginning has no doubt been made,wih the various task forces and notifications issued by the state government on “Reforming the State Administrative and Finance System”.

“Such an exercise is unprecedented in our history in the last 15 years…We have broken a practice about administrative structure,organisation and procedure involved with big cows unable to utilize their own milk,”says the analyst.

No joke.This was sought to be changed through a simple administrative and financial reform.By strengthening power of the Head of the Department to sanction higher amount of fund meant for the development schemes and re structuring and reducing the number of Departments,the BJP government led by Das has achieved what his predecessors had failed to make it.

Clearly,as a positive result,while his predecessors always suffered a great deal by failing to spend less than 70 percent of the total annual budget outlay every year,the Das government is expected to make use of higher percentage of development fund in the current financial year (2015-16).

No wonder why the World Bank in its report has already showed implementation of a 98-point action plan intended to push India up the list of countries ranked on the ease of doing business.For the BJP government,it became a status report of itself. In fact,the 132-page report became the first pat on the back for the Raghubar Das government, which managed to pull the state up by its bootstraps from 29th on the list in March to third by the World Bank report.

Six other notable works done by the Das government and recorded by www.jharkhandstatenews.com were:

One,Memorandum of Agreement (MoA) was signed between Jharkhand government with Government of India”s NTPC Ltd for taking up the state government run sick Patratu Thermal Power Station (PTPS) through a Joint Venture Company to be promoted by NTPC and Jharkhand Bidyut Vitaran Nigam Ltd. (JBVNL) with 74:26 equity participation. This was a great step forward in the power sector.

Two,in the road sector,as much as 1000 KM long State Highways were almost ready.

Three,in rural belt,5.07lakh families out of a total annual target of 6.50 lakh families were provided jobs by the state Rural Development Department.

Four,slipping out of the sand scam last year,the state Mines Department not only auctioned 369 out of total 640 sand banks(Balu Ghats),but also earned a record sum of Rs 145.50 crore.

Five,to contain corruption,the old Vigilance Bureau was dissolved and a new body called ‘Anti Corruption Bureau was set up and as many as 65 senior officers were booked and jailed on charges of corruption.

Six,for the first time,Jharkhand showcased its rich cultural heritage of Dumka’s Maluti temples and the selection committee adjudged the Jharkhand tableau as the second best among the tableaux of 16 states that rolled down Rajpath on January 26,2015.Now,Maluti is being developed as a tourist site.

Raghubar Das,quoted in the 63 page booklet –‘Badalta Jharkhand’-published by Jharkhand Information and Public Relations Department,says:”During the past one year,we have honestly served you.While doing service,many opinions and  came which I accepted because we all have one aim-Jharkhand must move forward and touch the height of development.”

However,the ‘development’ was not visible in any one of 13 villages in Ranchi,Khunti,Lohardaga and Gumla districts- visited by a team of journalists dispatched by www.jharkhandstatenews.com  last week  to study the ‘change’ during the Das regime.

Notably,the CM has made many wind castles by promising almost A to Z to people like making ‘Patratu as Switzerland’ amid high expectations of the people who had made the BJP gain majority in the 81 member strong Jharkhand Assembly in 2014.”I think this government lacks focus.It does not know that it has a limited period of 4-5 years to serve the people.No way during this short period Switzerland can be built in Jharkhand”,said a school teacher.

Yet another controversial work initiated by the state government is linked with the Narendra Modi government’s prestigious Smart City project.Though the Centre has picked up Ranchi,the concerned authorities of this state,instead of planning to turn old and filthy Ranchi into a model city, have prepared a plan to build a new ‘Smart City’ near the Project Bhawan in Dhurva.

Quipped a sweeper inside the Project Bhawan:”“Sir,it is going to be a scam with a difference in Jharkhand where the prestigious smart city project of the Prime Minister Modi will make the state government build a new city.Sad thing is a plan toward this end was already sent to the Centre for approval.”

Is this a product of a cocktail of corruption and incompetence?

(Manoj Prasad,Editor,www.jharkhandstatenews.com,wrote this story on the basis of reports prepared and provided to him by a team of journalists who visited 5 towns and villages each in Jharkhand during December 15-25,2015).

Representational Picture taken by Ratan Lal for wwww.jharkhandstatenews.com to mark the first year of Raghubar Das government in Jharkhand.