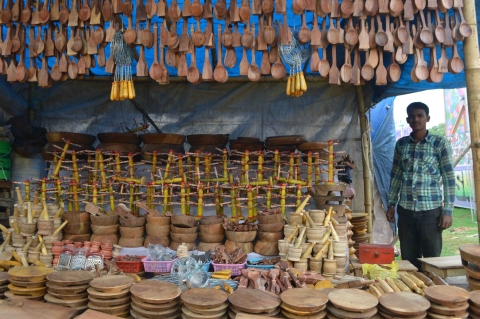 Jangannath Rath Yatra on Wednesday that coincided with Eid-al-fitr after decades reflected the message of peace and communal harmony, as thousands of devotees, who are set to participate in the procession with enthusiasm and joy, do not fall short on celebrating the Muslim festival too.
As several tableaus, supported on trucks are going to be part of the Yatra, passing

through communally sensitive areas in both Hatia and Dhurva areas in Ranchi amid tight security, several

Muslim youths and Hindu priests were seen sharing greetings.
While, many shop keepers in Hindpiri-Muslim dominated area-and Hatia where Jagannathpur temple is located and entrepreneurs have put up make shift shops,also reflect upon social messages like “celebrate unitedly” and save social set up. the security forces sought for “peace and law and order” as well.