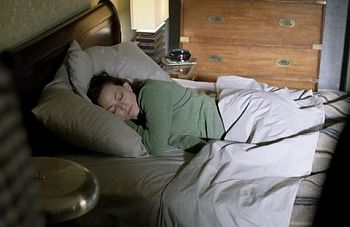 While you may not have a record to answer it,a study shows that average Britons on bed spend 38 hours and 50 minutes talking on the phone,over 70 days checking social networking sites such as Facebook, Twitter during a period of ten years, the Daily Mail reported.

The ANI report based on Daily Mail story also says that the average bed in Britain goes through 480 sex sessions, 720 arguments, 3,650 tweets and 14,600 text messages, during its ten year life span.

The story is the outcome of a survey of 2000 people in Britain.The findings are as follows:

Up to two hours and 12 minutes each week, which comes to almost 48 days over the decade will be spent watching TV or DVDs.

Children will be disrupting their parents’ sleep 360 days over the bed’s lifetime by joining them under the covers.

With the winter approaching, people will also head to bed 28 minutes earlier to warm up under the covers rather than turning the heating on.

Sharing a bed can be a nightmare for some, especially in the winter months with many rows occurring because of someone’s cold feet or one person hogging the duvet on their side of the bed.