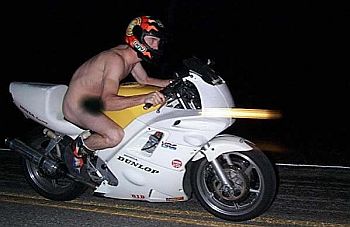 Naked man suffering from mental ailment and moving around in Ranchi,home to two mental hospitals,is an old story.The latest is about a man who rode a motor cycle naked.

The incident took place in Kottayam on Thursday when a 30 year old man was taken into the police custody on charges of riding a motorcycle naked.

Reports said this naked mo bike rider was first noticed by some passers by at the KK road area in Kottayam.One of them informed the police.But evenas the police gave him a chase,he sped off and entered the suburbs only to get halted by a closed railway gate.

Soon,the police nabbed him,took him to the police station,gave him a dhoti to cover himself and booked him for indulging in an obscene act under the Kerala Police Act.”The man was down with depression”,said the police.