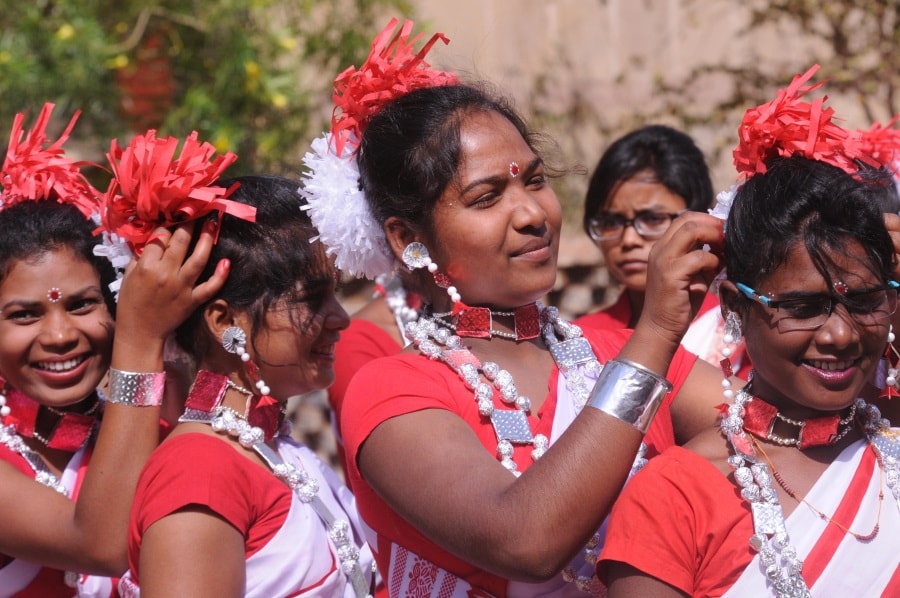 The scene was no different in the state capital-Ranchi.Almost all roads and highways were packed with red and white flags.Even in colleges and institutions,these red and white saran  flags were visible.

.In fact,Sarhul marks the beginning of New Year among the Adivasis.It is celebrated by the Oraon, the Munda and the Ho tribes of the Jharkhand.Celebrated every year in the first month of the Hindu calendar, on the third day of the moon or the fortnight of 'Chaitra', Sarhul marks the advent of the spring season.

Sarhul means worship of trees.Showing how connected they were with nature, these Adivasis start the Sarhul festival with the worship of Sal leaves and other elements of nature.

“Jharkhand is a new state founded on 15th November,2000. There are around 32 tribes in Jharkhand which enjoy their own peculiar way of living, religious rites and traditional cuisine and way of dressing. The tribes have been classified into hunter-gatherer type(Birhor, hill Kharia and Korwa), simple artisans(Lohra, Karmali and Chik Baraik etc.), shifting agriculturists(Sauria Paharia) and settled agriculturists(Oaron, Bhumij, Santhal, Munda etc.).

The common attribute of these tribes is that they hold great reverence for nature. Their surnames too have been taken from various names pertaining to birds, trees and flowers in nature. The perform songs and dances in a group which comprise of simple steps on the beat of traditional drums.

Sarhul is a major festival of Jharkhand.It is celebrated during Spring season. "Sar'' means year and ''hul'' means ''set to commence''. It is celebrated in the months of March-April according to Geogian Calender. Sarhul also signifies the birth of new borns in our planet. The festival is called ''baa porob'' meaning flower festival (''baa'' means flower and ''porob'' means festival) in Kolhan region.

Sarhul is an important festival of Oraon Tribe. They follow Sarna religion. Languages spoken by them include Kurukh, Brahia and Paharia. There are 14 clans in Oaron tribal community such as Gari, Lakra, Kispotta, Runda, Tirky, Toppo, Linda, Ekka, Kuzur, Bek, Kerketta, Bandi, Minz and Khalkho.

Significance of this Festival

Oaron tribals stay close to mother nature. Sarhul festival is celebrated when Saal trees get new leaves and flowers. They do not start eating  any fruit, flower or paddy   in this season before first offering them to their deity. The deities are adorned with ''Shalai'' or ''Shalony'' (saal flowers) and are distributed in every household of the village by ''pahan''(village priest) after various religious rites. These flowers are believed to be auspicious and are touched with the seeds before sowing them to beget a flourishing harvest later.

Sarhul is a festival when seeds are sown. This also signifies reproduction as it comes during the beginning of wedding season. The villagers celebrate it as a community. They pray, dance, sing and eat together giving a boost to the feeling of love and brotherhood. Karma, Jadur, Dassai and Kagha Parva are favourite dances of Oaron tribe. During this festival,they wear dresses of  myriad colours and dance in traditional outfits. Men wear ''karia'' and women wear ''khanria''.

Rituals are performed under the saal tree in ''Sarna Sthal'' or ''Jaher'' (sacred grove). Saal trees and other sacred trees are planted at this site which is reserved for religious and social occasions. This place can be inside the nearby jungle or in the village itself. Tribals have ''Sarna Jhanda'' too which is seen everywhere during the week long celebrations.

The village priest or ''pahan'' performs various rituals and is helped by his assistant known as  ''pujaar'' or ''panbhara''.

Rites and Rituals Performed during Sarhul

Tribals believe that Lord Dharmesh, also called Mahadeo, is the Almighty who regulates the universe. He is offered sacrifice of animals which are white in colour such as white fowls and goats and sometimes even milk,sugar and white cloth etc.

During prayers, ''pahanin''( pahan's wife) washes his feet to seek blessings. Then the ''pahan'' sacrifices three roosters of different colours --- one to appease Lord Dharmesh or ''Singbhonga'', another for village deities and third for their ancestors. The entire village gathered near Sarna Sthal is witness to this ritual. The sound of traditional drums like dhol, mandar, nagara and turhi reverberates in the air. The ''pahan'' distributes sacred ''achat'' and  saal flowers to every villager and also performs ''phool khonsi'' i.e. putting the flowers on the roof of houses. Their houses are built of timber and bamboo, mud walls and tiled roofs.

Sarna devi or ''Chala-pacho devi'' , who protects the Oaron tribe is also worshipped. She lives in the wooden ''soop'' kept at an auspicious place (''chala-kutti'') in the pahan's house.”

There is another ritual in which the ''pahan'' puts few grains of rice on the hen's head. If the hen eats the grains when they drop on the ground, this is an assurance of good harvest in the days to come.

Yet another ritual marks a symbolical marriage between the ''pahan'' or ''baiga'' and ''paahanin'' (his wife) amidst the entire village. Everyone prays for good monsoon. A bucket of water is poured over the pahan's head and saal flowers are distributed as ''prasad'' to everyone.

Oaron tribe or ''adivasis'' believe that Sarhul signifies marriage between earth and sky. Prayers on Sarhul are performed so that the earth can then be ploughed to raise crops. He-goat or fowl is sacrificed and offered to the deity at a common place known as ''Gaonhel Sthan'' along with flour cakes and liquor.

Shakua fruits or ''naur''(in local dialect) signify good agricultural yeild in future. Two days are marked for celebrations during this festival. The first day is called ''upaas'' or full day fast when no agricultural work is carried out in the village. The village pahan performs fasting. The second day is called ''chengna kati''.

The ''pahan''(village priest) is on fast for two days. He wears a dhoti woven using ''kaccha dhaga'' or virgin cotton after having bath in the morning. The dadhi-katna(source of drinking water) is cleaned and the ''pahan'' fills two earthen pots with water fetched from the ''dadhi'' and these pots of ''shakun paani'' are kept under the saal tree and are guarded throughout the night.

On the second day, the Oaron women undergo fast. The pahan performs various rituals and prays for the well being of the village. Finally, he checks the level of ''shakun paani''. If the level of water in the vessel is fine, good monsoon can be expected. However, if the level of water recedes due to hot weather, then this means that there will be less rainfall in future. It is a matter of great concern, as they are predominantly agriculturists.

This is a time to be in the lap of mother nature and enjoy festivities with the community. A bird such as fowl is sacrificed to please Goddess Adishakti, who is an incarnation of Maa vaishno Devi. Saal tree is believed to be the abode of the Goddess.