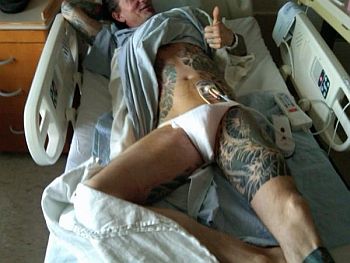 A man wanted his dick enlarged.Following a suggestion by friends,he used injection to put olive oil into it.Result?

This 50 year old man has lost his genitals.It had to be surgically removed since it had got badly infected.

The man is from Thailand where health officials have reportedly asked men not to use enlargement attempt using olive oil.In any case,they have sought to assure citizens that size isn’t everything after detection of his case.

Reports said this man had used untested therapy of injecting olive oil into his penis after his friends reportedly told him that it could make it bigger,ANI report based on Daily Mail story said.

“The practice, which can also involve bees wax, silicone or even paraffin, is common in Thailand and one Bangkok hospital reports that 40 patients a month receive treatment for side-effects.He developed a severe infection after injecting his penis with olive oil over a number of years”,said the same report.

“The infection was cancerous and urgent surgery was required to remove his genitals.This is the biggest genital surgery we have ever done as we found cancer, Sirikul Jiraranaikhajorn, spokeswoman for the Police General Hospital in Bangkok said.”