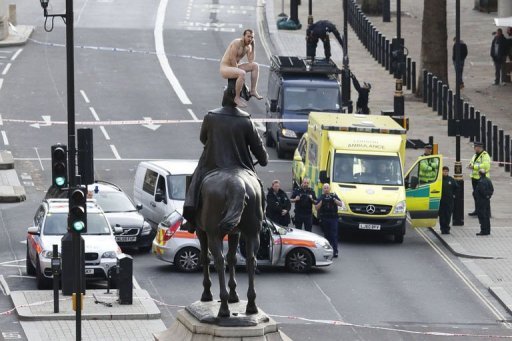 London witnessed a spectacle on Friday when a man climbed to the top of the life –size memorial to Prince George-and turned naked,bringing Whitehall to standstill for a while.

The memorial is located between the Houses of Parliament and Trafalgar Square,heart of London.

Reports quoting eyewitnesses said almost 30 year old man scaled the memorial to Prince George,the First Duke of Cambridge and a distant cousin of the Queen,”fully clothed before stripping off.”

He ‘remained on his perch apparently ignoring officers’ pleas. At one point he balanced acrobatically — with his arms out stretched — upon the Duke’s feathered plume, before sitting on his head”,said a report.

The same report based on inputs provided by ANI and Reuter quoted an eye witness saying,”I was on a school trip, on my way to the National Portrait Gallery and I looked up and saw the naked man on the statue. There were police on horses pushing the crowd back and firemen were trying to get him down. I was really shocked but it was quite funny. It looked like he was posing and he had his arms stretched out wide.”

Though an observer described the man’s deed as his attempt to show that under the rule of the British system of democracy,the economy had left the people ‘naked’,the Scotland Yard reportedly said it was believed that the man might have a knife as officers shut down part of the road, near the heart of Westminster in central London.