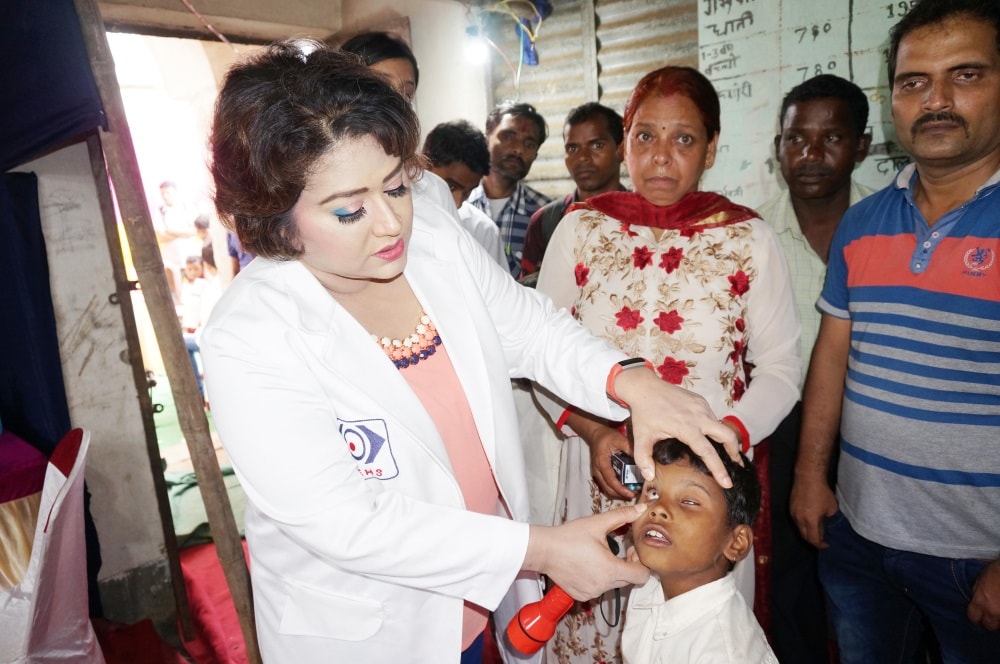 *www.jharkhandstatenews.com's File photo shows Dr Bharti Kashyap checking the eye of a kid inside her clinic-hospital in Ranchi.

Jharkhand sparkles with unabashed pride once again and this time it is not Mahendra Singh Dhoni.The credit goes to a shining lady doctor who has got the world of vision providers and all they hold at her feet.

Dr Bharti Kashyap,who has spent over 25 years in Ranchi,right from her early  days of life to the time she got selected to do her  MBBS only to further her academic career by completing M.S.(Ophthalmology) and a  Fellow in Cornea,has given the city and the state a place of pride on the world of the ‘Provide Vision’ campaign.She has been conferred with India’s most prestigious Med Achiever National Award.

The award was  handed over to her  by Union Health Minister Dr. Harshvardhan in a function organized by National Indian Medical Association.In the past nearly a decade,she had received a number of awards including  Leadership Development Award  by All India Ophthalmic Society and  Award  from Association of Community Opthalmologist of India.Her family members were enjoying every moment of these good news.

They knew all along that it is something their lovely sister would pull off with ease and elan.Her deeds and level of humility,sophistication,poise,confidence and maturity that belies her fair body is what they believe helped her make it to numero uno position.

Bharti,besides doing Ranchi,the state-Jharkhand-and her family proud,recalls her father had died leaving her as a student.”He wanted me to study and serve as a vision provider.With his blessings and blessings of the God,I save from my daily income from 24X7 medical service and spend it only to help provide vision to the blind.This make me keep smiling,beside giving me and my family happiness”,she says.

For some one,who having got a call on her mobile phone,left a dinner party only to return with a pack of cornea  taken out by her own hands from a dead body in the night to transplant it on a recipient next morning,and yet managed to  keep her cool,who dangled precariously from a cliff during another cornea transplantation carried out on a woman  free of cost and bringing vision to many other semi - blind people notwithstanding,it comes as no surprise that this mid-forty plus doctor Bharti has won out over scores of contestants from across the country to gain the coveted award.

“She  called me earlier this morning and was so happy.Not because she had got the award,but because she had been successful in rushing to the house of a dead woman,cutting and picking up her cornea,returning to her hospital and transplanting it successfully on a widow who had gained vision and laughed and laughed saying thank you so much Bharti”,says her son Bibhuti Kashyap,who too  is  Ophthalmologist at New Delhi based AIIMS.

*For her service to humanity, Dr.Bharti has been conferred with many state level awards as well.These awards were given to her by  Jharkhand Governor and its Chief Minister  in separate functions,each organized by prestigious social organization and national media group including Google’s 4.3 star holder-www.jharkhandstatenews.com

*Her relentless efforts were recorded in the form of  organizing eye screening camps, cataract surgery camps, squint surgery camps, diabetic retinopathy camps, mostly in the far flung  areas of the state. Eye screening and refraction  camps for 17 Lakhs children.They were  enrolled in Government run schools.Many of them were  victims of child trafficking.Some were spastic children between 2007 and 2017

*She leads  Eastern India’s  first active eye bank in  Bihar turned Jharkhand.This eye bank has  helped break the taboo of organ donation, encouraging  people and families to come forward to pledge their eyes and even donate the eyes of their deceased family members.She is founder of Kashyap Memorial Eye Hospital, Ranchi, the first tertiary care eye hospital of Bihar- Jharkhand accredited by the National Accreditation Board for Hospital and Health Care Providers (NABH). The hospital is serving the forgotten, poor and downtrodden are provided with the best in eye care, all completely free of cost through its charitable trust Kashyap Memorial Eye Bank.

*She  has become a household name in tribal belt of Khunti,Lohardaga,Palamau and West Singhum where she had waged a war against cervical cancer, a  common cause of cancer among  women in India, by holding cervical cancer screening camps in remote areas of these districts and educating women on nutrition, genital hygiene, multiple pregnancies and evils of pushing their girl child into early marriages.

*In Ophthalmology,she has made use of world’s latest innovation in cataract surgery (femto laser assisted cataract surgery), in Bihar and Jharkhand. Using World’s latest Femto Laser bladeless Lasik surgery, she has provided spectacle free vision to the needy youth and crafted their future. Has maximum number of international presentations to her credit in the field of Ophthalmology from  Jharkhand.

*Most important reason why a group of MBBS students mailed a letter to www.jharkhandstatenews.com jointly stating that “ She is a great force behind creating trained human resources for achievement of government’s goal of Vision 2020.We are very proud of her as her deeds had already led to reduction of prevalence of blindness from 0.8 % to 0.3 %.”