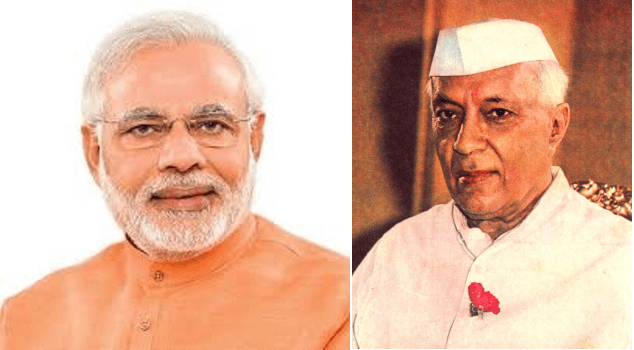 Speaking in Parliament on 3rdAugust 2017, minister of External  Affairs  Sushma Swaraj said that former Prime Minister JL Nehru earned name but it was for his own self where as Prime Minister Modi is earning name for the country.

This makes us ponder that Nehru spent 3259 days (almost 10 years) of his life; his early days of youth in British jail for the country and  for the freedom struggle. The  important point is that as a young and well educated lawyer, this was the prime career making time for him, where given for his background and education, he would have made a big name for gaining lollies.

But he chose to spend those many days  in jail, for the country. Not to forget that when his beloved wife passed away, he was in prison, in British captivity. He spent four jail terms in Dehradun jail too, where the jail dairy describes him as “ Gandum rang, gaal par til, sir se baal nadarad meaning-Wheatish complexion, mole on his cheek and no hair on head”

Modi, on the other hand, has no role in freedom struggle.He did not even go to jail for a single day during the days of freedom struggle. He and his party men and women  have only enjoyed the fruits of freedom, without any contribution towards achieving it. The true spirit of Nationalism is not empty chest beating by making tall claims but a person’s involvement in the development of the nation, its infrastructure and education.

Nehru was a visionary par excellence; it was his fore sightedness that India, that had just become free from the shackles of British dominance, developed so much, the steel industry, the hydro-power plants etc flourished. Nehru poured the first bucket of concrete into the foundations of Bhakra on 18 November 1955 and the dam was completed by the end of 1963.

In October 1963, at the ceremony to mark the dedication of the Bhakra–Nangal project to the nation, Prime Minister Nehru said, "This dam has been built with the unrelenting toil of man for the benefit of mankind and therefore is worthy of worship. May you call it a Temple or a Gurdwara or a Mosque, it inspires our admiration and reverence, this is the temple of resurgent India".

As a result of it, Punjab rose to become the granary of the nation, resulting into rise of status of living of its people. There were people then, with non scientific bend of mind who objected and opposed to the dam stating that this will render the water without life and as a result the water will neither be fit for consumption nor for irrigation of fields.

Nehru firmly put his foot down and rejected all such statements. Whereas on the other hand, here in Urja Pradesh-Uttarakhand, the hydropower projects were stalled or closed in the name of religion by Modi’s party as similar unscientific people rose up in dissent against the Hydropower projects otherwise by now Uttarakhand would have been self sufficient in its energy requirement and would have been supplying surplus energy to the nation.

Our foreign affairs minister also stated in Parliament that so far no other Prime Minister from India has ever gone to US and criticized its President for US, only Modi showed that spirit. It is a well known fact that during Bangladesh war, US sent its 7th fleet of Navy in favor of Pakistan but Mrs. Indira Gandhi, then PM of India, showing the steely grit she was known for, asked Field Marshal Manakshaw to destroy the fleet.

All this comparisons of Nehru and Modi is nothing but a blatant act of  pleasing the leader and all this is not good signs  for a country that claims to be the largest Democracy in the world. In democracy actions and its reactions should be judged by the manifestations of the act.And not by lectures and words There can be no comparison between chalk and cheese.Right?