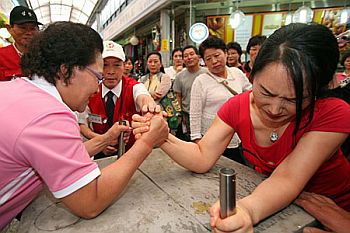 It was woman vs woman in an all women charity arm wrestling tournament in New York.When the tournament ended earlier this month,a participant woman had her arm broken.

ANI report said that Megan Weber, 31, of Lewes, beat her opponent – under the name “Sweet Treats”.”

But when the two hooked up again, this time using their left hands, Sweet Treats broke Weber’s arm in an accident”,said the report quoting New York Daily.

In a video posted on the Delaware News Journal’s website, the two women were seen in a deadlock for several seconds before Weber’s forearm snaps backward just above the elbow.”In the video the young physical therapist appears more stunned than injured, clutching the broken limb while her mouth hangs open.The News Journal said she broke her left humerus, the bone running from shoulder to the elbow”,said the ANI report quoting Weber,who participated in the tournament in the name of Rogue Scout.

“Stuff like that, you never expect things like that to happen.I was looking forward to a fun thing to do for a good cause,” she said. “It’s nobody’s fault. It’s just a freak thing that happened,” she reportedly added.