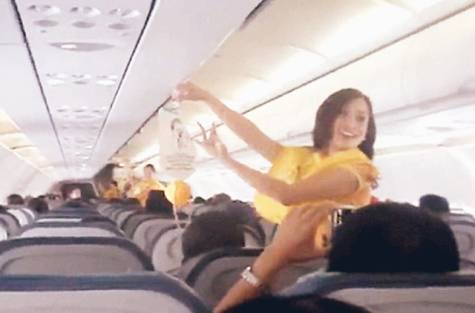 Sex related activities aboard a flight were a routine.So much so that Wikipedia has a page on them and there is a slang called Mile High Club (MHC) referring to individuals who have sexual intercourse while aboard a flight.

Now,if a story floated by ANI is to be believed,a survey of air passengers revealed that nearly 15 percent of them flying around the Asia Pacific region claim to have “witnessed some form of sexual conduct on a plane.”

Though there is no study explain as to what caused them to indulge in the sexual act aboard the flight,the ANI report observed that “there is something about flying that seems to make many people let go of their inhibitions.”

The ANI report states as follows:From couples falling half-naked out of the lavatory to some bizarre noises, the fascination with joining the mile high club shows no sign of waning, according to a survey by travel website Wego.com.

The most common saucy act involved couples entering the lavatory together followed by “lots of banging and squealing,” although sneakier activities underneath a blanket were also quite popular, the Herald Sun reported.

Some of the more blatant acts included a woman straddling a traveller in business class on a Sydney to London flight, while another passenger was asked to join the mile-high club by a stranger while waiting in line for the lavatory.

Other encounters include a lipstick message written on a toilet mirror which was unexpectedly viewed by an elderly woman when the young man (for who the message was intended) let her used the bathroom first, and a cabin-crew member who discovered two passengers in a wheelchair closet.

Much debate still surrounds the legality of the practice of joining the mile-high club, although research indicates there’s a dependence on individual country laws and also just how visible the act is to other passengers which can fall under “public sex” laws.

Two respondents said they watched couples being escorted by police from flights in Australia as a results of their raunchy mile-high antics.

The report appears to be seminal in nature since no story in the past had talked about the cases of sexual activities aboard a plane.