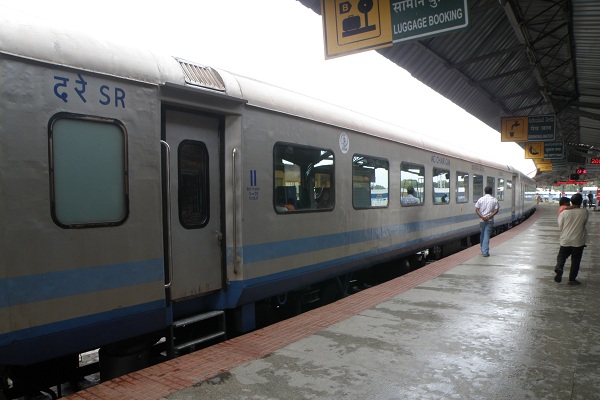 As it is,the Steel Superfast Express has 23 coaches,ferrying over 3,500 passengers in AC chair cars,3rd AC,!st Ac and ordinary chair cars.Its conventional rakes run on self-generating system at a maximum speed of 110 km/h.In this system,each coach generates its own power through a dynamo fitted under the coach,and a battery which is used in case of an emergency or when the coach is not in motion.

The LHB coaches are designed for an operating speed up to 160 km/h.It can go up to 200 km/h.However, they have been tested in India up to 180 km/h. Their length of 23.54 m and a width of 3.24 m means a higher passenger capacity, compared to conventional rakes. The tare weight of the AC chair car was weighed as 39.5 tonnes.They are considered to be "anti-telescopic", which means they do not get turned over or flip in case of a collision (chiefly head-on).

These LHB coaches are made of stainless steel and the interiors are made of aluminium which make them lighter as compared to conventional rakes. Each coach also has an "advanced pneumatic disc brake system" for efficient braking at higher speeds, "modular interiors" that integrate lighting into ceiling and luggage racks with wider windows. The improved suspension system of LHB coaches ensures more riding comfort for the passengers compared to conventional rakes.

The air conditioning system of the LHB coaches is of higher capacity compared to the older rakes and is controlled by a microprocessor which is said to give passengers better comfort than the older coaches during summer and winter seasons. They are relatively quieter as each coach produces a maximum noise level of 60 decibels while conventional coaches can produce 100 decibels.

These LHB coaches are currently used in three-trains-Hawrah-Mumbai Duronto Express,Howrah-Pune Duronto Express and Bhubneshwar-New Delhi Rajdhani Express.All these train pass through Tatanagar.The Steel Superfast Express will be the 4th train to carry LHB coaches.And as such,passengers travelling by it can look forward to a more comfortable and safe journey soon.