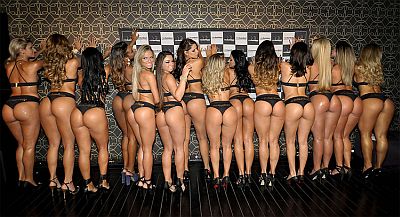 In India,bum of a female was always a subject kept under the veil.But in Brazil,it was viewed,measured and photographed in an annual contest.This year, a model was crowned Miss Bumbum on Friday.

Reports said a jury of six women and five men selected 25 year old Carine Felizardo from 15 finalists in the second annual edition of the contest, held at a Sao Paulo hotel.She was handed over a cheque of 5000 reais.

The Herald Sun quoted her as saying:“I am overwhelmed, very, very happy.I would like to thank those who voted for me, those who believed in me, my family, my friends.”

As many as 15 finalists competed in the grand finale in front of a gathering of a predominantly male crowd of journalists from around the world.These contestants had been successful in an an online elimination round that drew participants from all around Brazil.

The ANI report said:”The jury gave its decision after the contestants had sashayed down the catwalk first in evening dresses and later in string bikinis.’