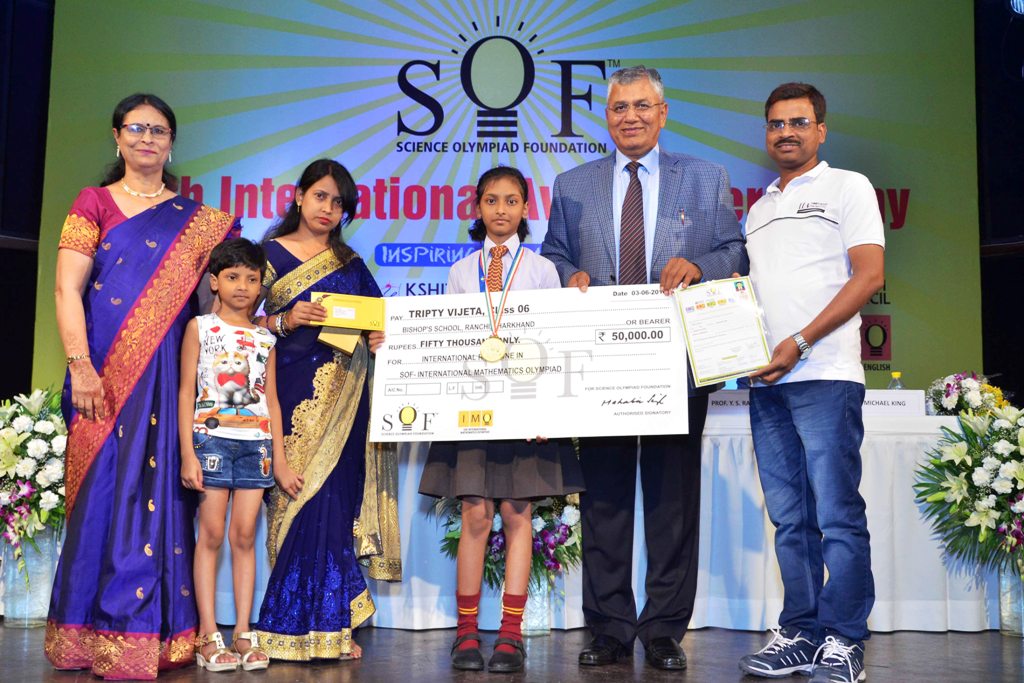 Students of  Ranchi made their parents proud by garnering International Rank in the SOF Olympiad. Over 45000 schools from 1400 cities across 30 countries participated in the six SOF Olympiad exams during 2017-18 and around millions students appeared in the Olympiad. In this Olympiad, Ranchi came out with flying colours. Total participation from Ranchi was 41754.

International Rank 1 bagged by Harshit Raj Maurya of class 5th from St. Xavier School Doranda in International General Knowledge Oympiad and Tripty Vijeta of Class 6th from Bishops School in International Mathematical Olympiad and they got a gold medal ,merit certificate and 50,000 cash as a prize.

Science Olympiad Foundation organized a felicitation function to recognize & award the International winning students, teachers and principals of Olympiad exams held during the Academic year 2017-18. During the function, the top 3 SOF international rank holders from classes one to twelve for the 6 Olympiad exams conducted by SOF were awarded. There were total 180 awards.

The top 25 principals and top 50 teachers – from 30 countries - whose students put up an exceptional performance at international level, were also felicitated with cash awards, mementos & citations.

While speaking with the audience, Shri Choudhary lauded students and schools for achieving excellence in academics and said that excellence is its own goal. He referred to the book Exam Warriors written by Prime Minister Shri Narendra Modi for children. Picking up a few wisdoms from the book, Shri Chaudhary told students to celebrate exams like festivals and told students that exams are not a test of your personality, but a test of your preparations. He spoke of science and the will to perform better with the help of imagination. He said imagination is the sole characteristic of humans across the living world as we know it – no machine or animal possesses it, and is critical to develop broader thinking

Mr Mahabir Singh, the founder & Director of SOF shared that over 45000 schools from 1400 cities across 30 countries participated in the six SOF Olympiad exams during 2017-18 and millions of students appeared in them. About 55000 students from 5850 schools have been awarded for achieving top state level ranks. In addition, over 800000 students have been awarded "Medals of Excellence" for achieving top rank in their respective schools.

Runs a scholarship called The Academic Excellence Scholarship" to recognize students' exhibiting all round excellence in academics. Under the prestigious AES, 160 students across 25 countries are awarded with a trophy, a citation and a cash award

From 2018-19, TCS (Tata Consultancy Services ) will also join hands with SOF bringing in their vast digital and on-line expertise in conducting exams.

During 2017-18, a new Olympiad exam- SOF-International General Knowledge Olympiad was introduced. The IGKO was  launched on the repeated suggestions received from schools and parents. Students from classes one to ten could appear in the IGKO.