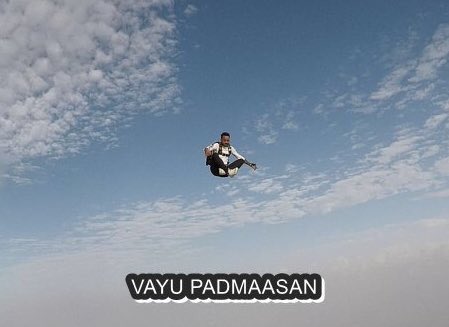 Prime Minister of India Narendra Modi promoted mind and body uplift physical exercise-Yoga gained the support of millions of people across the world this morning.

On top of them were IAF officers who did yoga in the sky. Wing Commander KBS Sanyal performed 'Vayu Padmaasan' in the sky, reports Mehak Anand in topyaps.com.This left many Indian proud of them.

Elsewhere,It appeared as if it wasn’t just the traditional Sadhus practising their daily yoga routine in their homes and studios. They were joined by thousands of people—including PM Narendra Modi in Dehradun—performing asanas around the world to celebrate the 4th International Yoga Day.

Brightly coloured yoga mats were spotted everywhere from the streets of Paris to the parks of China. Then there were those who took their yoga sessions a notch higher by performing it in the air and aboard vessels on the seas.

Even in villages of many states in Indian states such as UP,MP, Rajasthan, Bihar and Jharkhand, thousands of boys and girls practised yoga. Even thousands of staff and officials government and private sector companies performed yoga.

Like many other Governors and Chief Ministers including Raghuvar Das led the government officials to perform yoga in a public place.

Among all the pictures of the people performing yoga,one picture appeared mind-boggling was Vayu Padmaasan performed by a performer.

Even in Pakistan,yoga was performed under the leadership of Yogi Sumaira Servat who performed 100 Surya Namaskar in Islamabad.