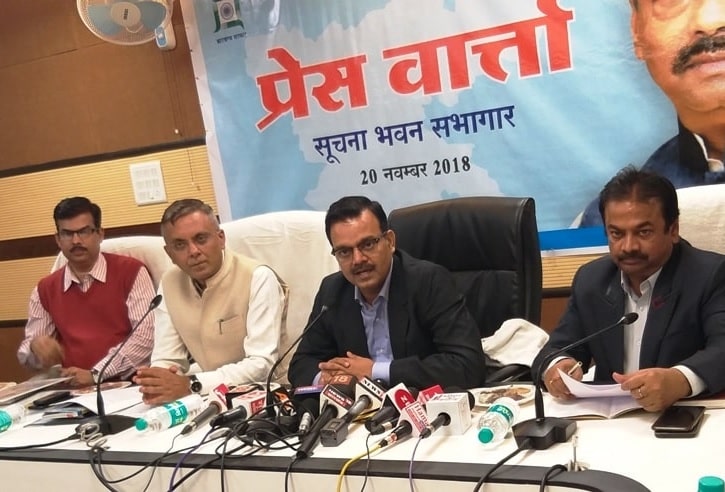 Dr. Sunil Kumar Barnwal, Secretary, Department of Information and Public Relations and Principle Secretary to the Chief Minister said that in the 49th International Film Festival (IFFI) to be held in Goa from November 21-28, Jharkhand has been selected as the Focus State. It's a matter of pride. For the first time in this festival a state is being included as a focus state. The film festival will be organized in Manquinez Palace, Inox, Panaji, Goa. Secretary, Department of Information and Public Relations Dr. Sunil Kumar Barnwal and Secretary, Department of Tourism, Arts and Sports, Shri Rahul Sharma were jointly addressing the press conference organized in Suchna Bhawan.

Dr. Barnwal informed in the press conference that 212 films from different languages of more than 68 countries will be screened at the International Film Festival, in which seven films made in Jharkhand- MSD The Untold Story, Death in the Ganj, Ranchi Diary, Begum Jan, Mor Gaon Mor Desh, Panchlet, Ajab Singh kiGajab Kahani will also be screened along with other films. The film festival will celebrate November 24 as Jharkhand Day.

He told that the invitation has been sent to many filmmakers to join the film festival. Including Vidya Balan, Mukesh Bhatt, Ravi Kishan, Vijay Swamy, Ashwini Kumar, Yashpal Sharma, Rajesh and other dignitaries associated with the film.

Secretary, Department of Tourism, Arts and Sports, Rahul Sharma informed that on Jharkhand Day, cultural group will perform Jharkhandi folk dance, which includes Nagpuri, Paika and Chhau dance. People from the country and the world will know Jharkhand's art culture through cultural program.

On this occasion, Director, Information and Public Relations Department, Ram Lakhan Prasad Gupta, Joint Secretary, Department of Tourism, Arts and Sports Department, Rajiv Ranjan along with others were present.