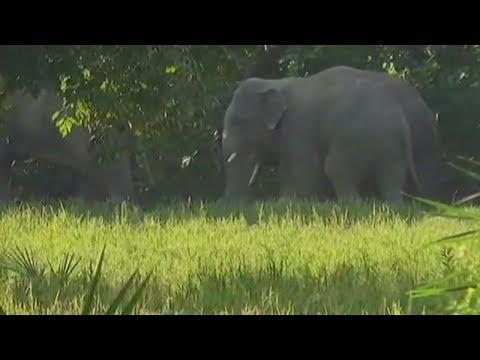 "We lost crops. This caused hell. We have been waiting to get compensation in vain", cribs Sudhir Bhuina echoing the sentiments of scores of farmers in and around Palamau Tiger Reserve(PTR) forest in Jharkhand.

Every year the period between July and December is considered as vulnerable months of crop destruction by wild elephants. Betla and Garu ranges of the PTR are the most vulnerable ranges from the point of view of the elephant raiding and destroying crops. Bareysarn, Chhipadohar, Kutku and Mahuadarn ranges too are not free of the elephant menace.

Forest Department officers say the destruction of the crop is done by two kinds of elephants.  In Betla range it is PTR’s elephants that destroy the crop mostly. So is the case with Garu and Bareysarn ranges.

Also, there are instances where a herd of Chhatisgarh elephants had caused the destruction of crop and houses in villages falling in and around the PTR. More, the crop destruction and damages of houses/ huts by elephants go together in villages there.

In view of this annual menace, the state government had allocated Ras 14 lakh for compensation purposes in this ongoing financial year. Compensation comes for crop loss, hut loss and life loss. Even where wildlife like an elephant, bear, wild boar etc has maimed anyone compensation is to be paid for it by way of providing the victim adequate treatment and for his upkeep till he is back to normality.

A hectare loss of crop by wildlife has 20,000 rupees as compensation.  Similarly, loss of cattle by wildlife gets Rs 15,000 as a compensatory amount.

The Field Director said, “I have asked our rangers to see that compensation is not made to linger. This causes resentment. This we have to dilute by all means.”

Records show that compensation was paid in cash till now in PTR which from this year is to be credited into bank accounts of the victim farmers of PTR. More, compensation is to be given to those only in whose name the ‘ Lagan’ is paid and its payment receipt is up to date that is no backlog of Lagan.