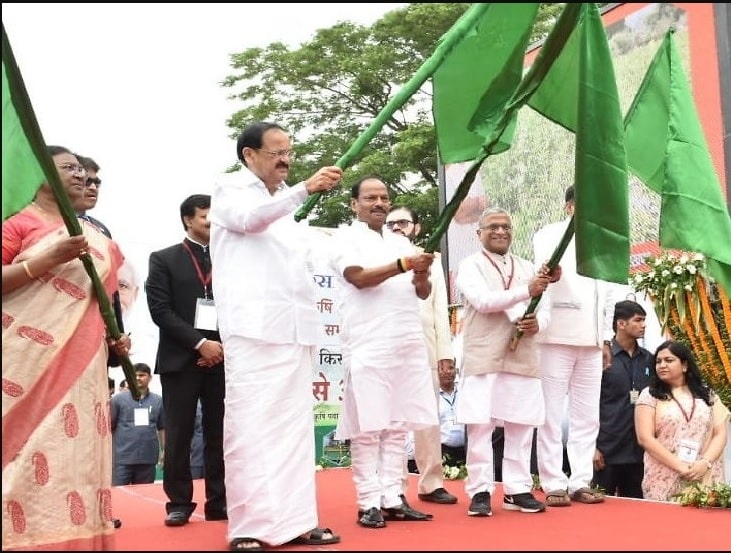 *Picture shows (Left to Right);Jharkhand Governor Draupadi Murmu,Vice President Muppavarapu Venkaiah Naidu,CM Raghubar Das and Deputy Chairman of the Rajya Sabha,Harivansh at Harmu ground in Ranchi. Behind them stands Principal Secretary to CM,Sunil Kumar Barnwal.And standing below the podium on the right side is Principal Secretary,Agriculture Puja Singhal.

Ahead of Assembly elections expected to be held before the end of 2019, the BJP government led by CM Raghubar Das is leaving no stone unturned to win the support of farmers. Many schemes connected with scholarship and pension of their children and parents as well as irrigation were being implemented across rural areas in Jharkhand.

On Saturday, Vice President Muppavarapu Venkaiah Naidu launched Mukhiya Mantri Krishi Ashirvad Yojna(MMKAY) in presence of Governor of the state, Droupadi Murmu, Chief Minister Raghubar Das and Deputy Chairman of the Rajya Sabha, Harivansh at Harmu ground in Ranchi. All of them flagged off this ambitious scheme from a podium at Harmu ground. Senior officers of the state government including Principal Secretary to CM, Sunil Kumar Barnwal and Principal Secretary, Agriculture Puja Singhal took part in the function.

Against the backdrop of BJP's grand promise to double the income of farmers by 2022, MMKAY was launched. As per this scheme, small and medium farmers will be provided grants- in -aid at a rate of Rs 5000 per acre per annum. This means that if a farmer owns just one acre of land, he will get Rs 5000.Similarly,the owner of two,three,four and five acres will get grants-in-aid of Rs 10,000,Rs 15000,Rs 20,000 and Rs 25,000 per annum respectively.

The state government claims, MMKAY will benefit as many as 35 lakh farmers in Jharkhand.' This scheme will boost up the morale and empower farmers", opined  Venkaiah Naidu while addressing the people. Das who has been actively promoting several development schemes has activated the state administration to implement this ambitious farmers scheme as well.

Already,the Common Service Centres(CSC),each run by Village Level Entrepreneur,was directed to hold camps in rural areas to enlist names of farmers as soon as possible to provide benefit of the scheme to farmers by enlisting their names,land records and bank account numbers so that the grants-in-aid can be transferred to them through DBT(Direct Benefit Transfer scheme)