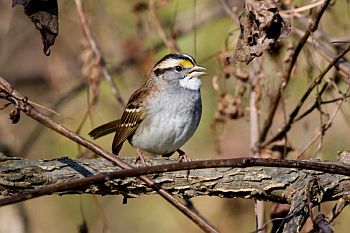 Birds experience almost the same emotions as humans do when they listen to music.

This is the conclusion of research  on white-throated sparrows, published in Frontiers of Evolutionary Neuroscience.”We found that the same neural reward system is activated in female birds in the breeding state that are listening to male birdsong, and in people listening to music that they like,” says Sarah Earp,who led the research as an undergraduate at Emory University.

A story on this study carried by Science daily said,”For male birds listening to another male’s song, it was a different story: They had an amygdala response that looks similar to that of people when they hear discordant, unpleasant music.”

The study, co-authored by Emory neuroscientist Donna Maney, is the first to compare neural responses of listeners in the long-standing debate over whether birdsong is music.

“Scientists since the time of Darwin have wondered whether birdsong and music may serve similar purposes, or have the same evolutionary precursors,” Earp notes. “But most attempts to compare the two have focused on the qualities of the sound themselves, such as melody and rhythm.”