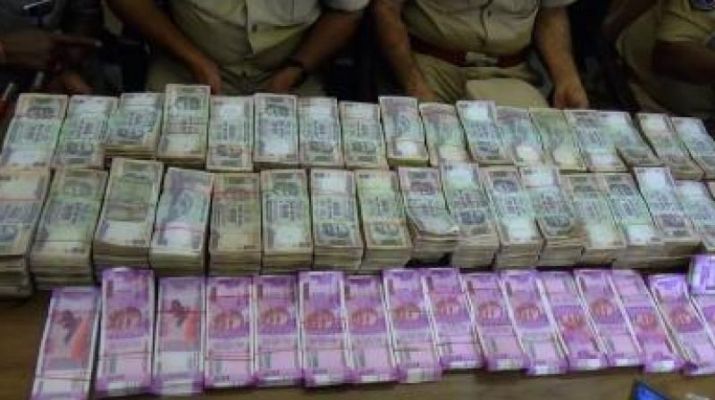 The seizer of Rs 2.44 crore from the residence of a junior engineer of the Rural Development Department in Jharkhand's Seraikela-Kharsawan district on Friday, is indicative of a major problem responsible for the shortage of cash in the banking system of India today.

At a time when the Election Code of Conduct was in force in the state where Assembly polls are slated to be held soon, the Anti-Corruption Bureau (ACB) had seized Rs. 2.44 crore in cash from the residence of a junior engineer of the Rural Development Department in Seraikela-Kharsawan district.

Raids were carried out in the residence of this junior engineer, Suresh Prasad Verma on Friday after he was arrested on Thursday while allegedly accepting a bribe of Rs. 10,000 from a contractor for clearing his outstanding bills, a feature of corruption common in the government offices across the country.

"If 2.44 crore cash was recovered from the residence of a junior engineer, how much cash must be lying in residences of senior engineers and officers can just be imagined. The truth is after  Aadhaar was made mandatory for bank accounts, purchase of property, land and gold. Then, demonetization took place. This screwed bribe-takers", opines a retired IAS officer.

The percentage of bribe sums had, in fact, increased over the years."The bribe givers and takers flourished even after the above reforms were introduced by the Narendra Modi government. But the money transacted by these corrupt men and women was always in the form of cash. Since they could not purchase any property, the bribe sums were dumped. This has generated a huge economic problem.", said another retired IAS officer.

In the current case, a contractor had lodged the complaint with the Anti-Corruption Bureau. Responding to his complaint the bureau sleuths laid a trap and caught the engineer red-handed.

Notably, during the raid at junior engineer's residence, bureau sleuths had also recovered the Anti-Corruption Bureau team conducted search operation in the house of the accused and seized Rs 2.44 crore in cash, 100 gm of gold and land documents. Most of this cash was in the form of currency notes of Rs 2000.

Against this backdrop, in order to contain cash crunch in the banking market of the Reserve Bank of India, Rs 2000 and Rs 500 notes need to be demonetized. And after property in the form of gold, land, house, flat, mall, shop and so on linked with Aadhaar, a government certificate issued to the owner for annual verification.