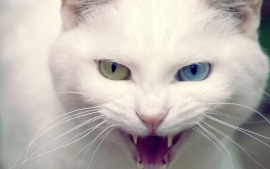 Investigations by the police in Brazil revealed that a cat was used to smuggle inside prison drills,an ear phone,a memory card,batteries and a phone charger.

The cat was caught and admitted at an animal disease centre.’It was provided with medical care”,a report from Brazil said.

The incident took place on January 1 when the guards saw a white cat enterin g the gate with its body reportedly wrapped with tape.The examination brought into light that this cat carried “drills, an earphone, a memory card, batteries and a phone charger”, ANI story based on the Daily Mail report said.

“All 263 detainees in the prison of Arapiraca, a city of 215,000 people in the state of Alagoas, are considered suspect in the plot, which is being investigated by local police”,said the story.

“A prison spokesperson told local paper Estado de S.Paulo that it’s tough to find out who’s responsible for the action as the cat doesn’t speak.”