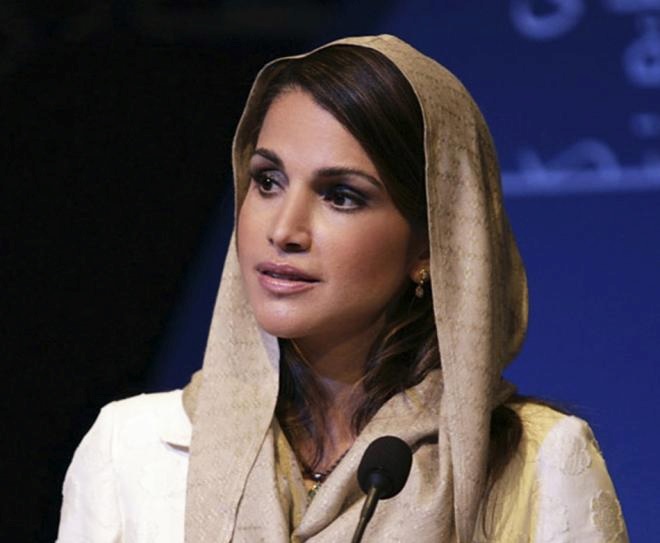 Queen Rania (Jordan)
Queen Rania of Jordan is one of the most beautiful royal members in the world. Rania met King Abdullah II (who was a prince at that time) of Jordan in January 1993 at a dinner party and announced their engagement two months later. On June 10, 1993 they were married. Rania, who has four children, is well-known for her involvement in philantrophic, charitable and cultural activities. She has advocated the cause of furthering the quality of education for the children in Jordan. She is also known for advocating global education and for urging world leaders to fulfill their commitments towards the second Millennium Development Goal.

Princess Masako (Japan)
Crown Princess Masako is the eldest daughter of Hisashi Owada, the former president of the International Court of Justice. Masako married His Imperial Highness Crown Prince Naruhito in a traditional wedding ceremony on 9 June 1993. Masako and Naruhito have one child – Princess Aiko – who was born on December 1, 2001. The birth of a daughter caused a huge uproar in Japan as many people wondered whether male-only royal primogeniture law would be changed to allow a woman to inherit the Chrysanthemum Throne. The Japanese lawmakers had planned to change the law that would allow women to ascend to the throne so that the imperial throne be continued into the future in a stable manner. However, the plan was shelved after Masako’s brother-in-law, Prince Akishino, and his wife Princess Kiko gave birth to their third child – a son called Hisahito. Masako has been out of public gaze since 2002. Media claim severe pressure to produce a male heir and adjusting and conforming to the life in the Imperial Family has taken a toll on her mental and physical health.

Catherine Middleton (England)
Catherine Middleton, better known as Kate Middleton, married Prince William, second in line to the throne of England on April 29, 2011. Kate first met William as early as in 2001. They reportedly broke up in 2007 but later continued to be friends. In 2008, they rekindled their relationship once again and announced their engagement on November 16, 2010. Kate is the daughter of Carole Elizabeth Middleton and Michael Francis Middleton, who own Party Pieces, a private company with an estimated worth of £30 million.

Madeleine Josephine (Sweden)
Madeleine Thérèse Amélie Joséphine, the youngest daughter of King Carl XVI Gustaf and Queen Silvia of Sweden, is the third in line to the royal throne. Madeline is one of the most beautiful royal princesses in the world. In 2008, she was ranked 12th in Forbes’ list of 20 Hottest Young Royals. Madeline is well-known for her fashion sense and good looks.

Charlotte Casiraghi (Monaco)
Charlotte Marie Pomeline Casiraghi, better known as Princess Charlotte of Monaco, is probably the most beautiful royal women ever. Charlotte has everything – name, fame, wealth and above all, good looks. She is the granddaughter of the late ruler of the Mediterranean principality, Prince Ranier III, and legendary Hollywood actress Grace Kelly. Charlotte, who is the fourth in line to the throne of Monaco, is well-known for her fashion sense and has appeared at fashion shows, art exhibits, and equestrian events. She is the official equestrian “ambassador” of the Gucci label and has her clothes exclusively designed by Frida Giannini, the creative director of Gucci.

Princess Mary (Denmark)
Crown Princess Mary of Denmark is the wife of Frederik, Crown Prince of Denmark. A commoner, Mary caught Frederik’s attention when he was visiting Australia during the 2000 Summer Olympics. Their marriage in 2004 recieved widespread media attention as it was portrayed as a modern fairytale romance. Mary is one of the world’s most fashionable people and is now a mother of four.

Jetsun Pema (Bhutan)
Jetsun Pema caught the media’s attention recently because of her engagement with King Jigme Khesar Namgyel Wangchuck of Bhutan. The India- and UK-educated Pema has a royal bloodline and has been called “warm and kind in heart and character” by the king who announced to the Parliament on May 20, 2011 that he wouldd marry her in October 2011.

Leticia Ortiz (Spain)
Leticia Ortiz is the wife of Felipe, Prince of Asturias and the heir apparent to the Spanish throne. Leticia was a news presenter by profession and had worked for the Spanish version of the economic channel Bloomberg and the news network CNN+ (the latter went off the air in December 2010). Leticia married Felipe on 22 May 2004. They have two daughters, Leonor and Sofia. She has no issues from her first marriage with Alonso Guerrero Pérez. The marriage lasted only a year and she divorced Alonso in 1999. Leticia’s good looks and charm has won over everyone.

Charlene Wittstock (Monaco)
The South African Olympic swimmer is the fiancée of Albert II, Prince of Monaco. Charlene, who boasts of South African, German and British ancestry, met Albert II in 2000, when she had traveled to Monaco for a swimming competition. The two have been inseparable ever since and on June 23, 2010 they became officially engaged. Their civil marriage ceremony has been scheduled for July 2, followed by a religious ceremony on July 3.

Zara Philips (England)
Zara Anne Elizabeth Phillips, better known as Zara Phillips, is the second child and only daughter of Princess Anne and her first husband Captain Mark Phillips, and the eldest grand-daughter of Queen Elizabeth II. Zara is a well-known equestrian. She won the 2006 FEI World Equestrian Games World Championship in Aachen, Germany and was voted BBC’s Sports Personality of the Year. She is currently engaged to rugby union player Mike Tindall and will marry him on July 30, 2011.