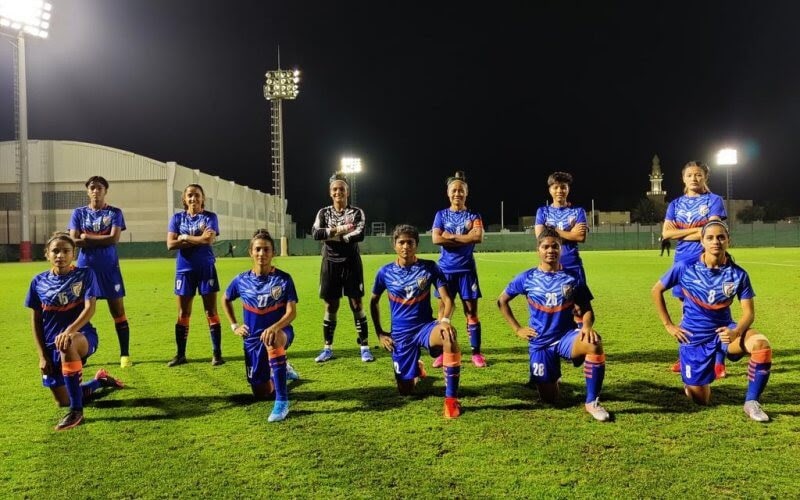 Indian  Women failed to capitalize on the chances that came their way and went down 0-1 to Tunisia in a friendly football match at the UAE FA Stadium in Dubai last evening.

In their earlier friendly India had beaten UAE 4-1 in Dubai, with Manisha Kalyan, Pyari Xaxa, Sweety Devi, and Anju Tamang scoring one apiece.

According to the AIFF  release, Tunisia took the lead in the eighth minute through Heuij who scored from a free-kick and held on to it till the end. Before conceding this goal  India had their chance in the second minute when Dalima Chibber created an opening for Maniusha whose effort was foiled by goalkeeper Mariem. Soon after  India launched a barrage of attacks in their effort to restore parity. In the 11th minute, Manisha ran down the left flank and sent in a cross but the rival defence managed to clear it. Soon after, another cross from Sanju was collected by Mariem. Ten minutes later, Indumathi tried to place it in from outside the penalty box, but it missed the target.

The Indians preferred to play it among themselves, and in the 31st minute, Manisha’s free-kick missed the target and nine minutes later another free-kick -- this time from Dalima sailed wide.

Three minutes before the break mid fielder  Indumathi, found quite a bit of open space in front of her, but it couldn't find the target,

Changing over, Head Coach Thomas Dennerby brought in goalkeeper Shreya Hooda to replace Aditi Chauhan under the bar. Immediately after, India earned a corner but Soumya released the ball to Dalima, whose s effort sailed over.

The coach went for a double substitution in the 53rd minute – Ritu Rani and Pyari Xaxa coming in for Ashalata Devi and Renu respectively, as Indumathi took over the captain’s armband. Pyari almost made an instant impact off a corner after Soumya managed to find her. But Pyari’s header went wide.

However, Pyari did manage to nod it home off the next corner which India earned, but the referee disallowed it  The coach then went in for another double substitution in the 61st minute – Martina and Sumati replacing Sanju and Manisha.

Tunisia who was holding on to it till then launched a counterattack in the 63rd minute and it could have helped them double the lead had Shreya not managed to pull off a reflex save.

Dennerby brought in another substitution in the 68th minute – this time Indumathi making way for Sandhiya in midfield. Six minutes later Sandhiya maneuvered herself into some open space and did manage to take a snapshot but Mariem saw it off. And if that wasn’t enough, Mariem also denied Pyari in the 75th minute after the nippy forward managed to sneak in between the rival defense.

The Indian team will now travel to Bahrain where they will be playing against Bahrain and Chinese Taipei.

The matches are part of India’s preparation for the AFC Women’s Asian Cup India 2022, and the first exposure tour under Head Coach Thomas Dennerby, under whom the squad had trained in Jamshedpur for a month with support coming in from the Government of Jharkhand.