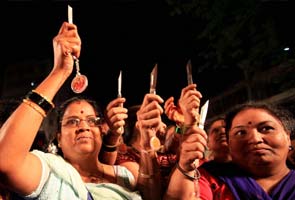 This story carried by the Midday today with a byline of Sujit Mahamulka has exposed the Shiv Sena to the charge that it was doing it in violation of the law.

Quoting Sadanand Date, joint commissioner of police (law and order),Mumbai,the story says:
“Schedule 1 (V) of the Arms Rules 1962 clearly states that apart from fire-arms, sharp-edged and deadly weapons like swords, daggers, bayonets, knives including kirpans with blades longer than nine inches or wider than two inches are prohibited. Carrying such weapons can attract imprisonment of one year which can be extended up to three years.”

Yet,the story adds that after distributing the first lot to women in Lalbaug, the Shiv Sena plans to give away 18,500 more through its various shakhas across Mumbai.

“On the eve of late Shiv Sena supremo Bal Thackeray’s 87th birth anniversary, Sena’s South Central Mumbai wing distributed over 2,500 knives to women at a function organised by vibhag pramukh Ajay Chaudhary at Ganesh Galli in Lalbaug last evening. Sena plans to distribute another 18,500 knives through its various shakhas across the city soon”,says the same story.

It quotes Sena MP Anil Desai, former MP Mohan Rawale and other leaders,who were reportedly present at the event saying: “This would surely help reduce women-related crime in the city. There is no politics behind the move and it is directed towards boosting the morale of women.”

Chaudhary says that the knives were being distributed solely for self-defence and would not be misused. “Sujata Savardekar (37), Pratibha Sapale (55), Shilpa Katate (40), Rashmi Sawant (43) and Chhaya Katkar (43), were the first few who received the knives in a symbolic gesture, following which Shiv Sainiks distributed the weapon to around 2,500 women”,says the story.

But no body was booked for violating the Schedule 1(V) of the Arms Rules,1962 till now.