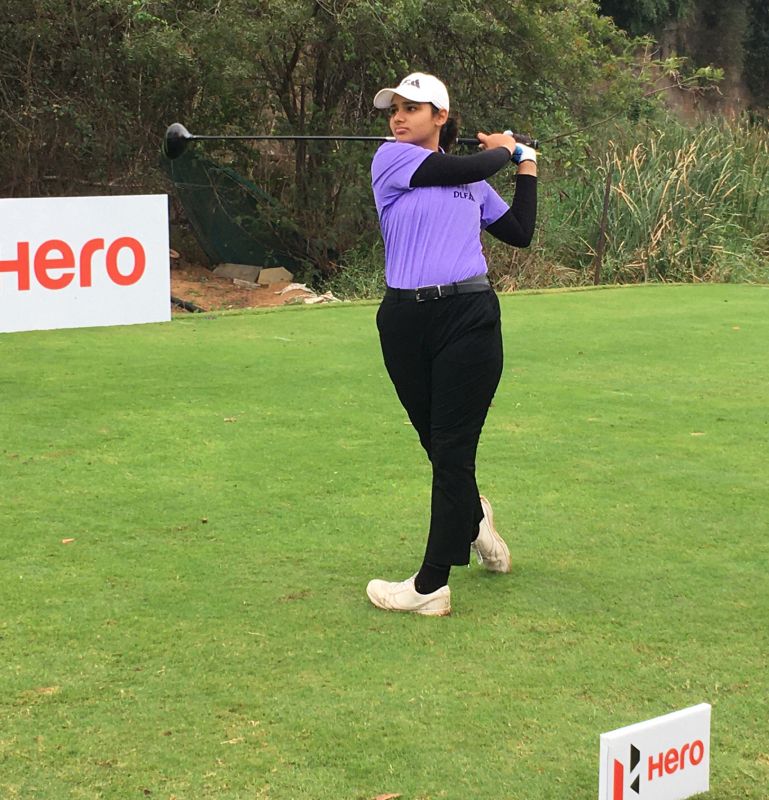 *Jahanvi Bakshi in action at HGA

Jahanvi Bakshi shot her third straight under-par round as she returned 2-under 69, her best after rounds of 70-70  to finish with 4-under 209  to win the 12th leg of Hero WPGT  at the Hyderabad Golf Club on Friday.

Jahanvi was five shots better than Vani Kapoor (73), who totalled 1-over 214.

Gaurika Bishnoi, who shared the second-round lead with Jahanvi, crumbled in the final round with five bogeys and no birdies in a round of 76 that saw her drop to Tied-third alongside Amandeep Drall (71)

Jahanvi, who had won twice before, became the first to win three titles on the Hero WPGT this season. She killed all prospects of a close fight with some very good golf, even as others gave away early shots.

Jahanvi, who has had a great season with at least a Top-5 finish in each of the past 11 legs barring one, once again finished right on top and it came in a commanding manner.

Amateur Sneha Singh (74) was fifth, while Khushi Khanijau, who finished with four bogeys in a row, shot 76 and was sixth.

Jahanvi began with a birdie on second and then dropped only one shot on the fifth. She made up with a birdie on ninth and 15th and parred the rest for her 69 to display very steady and clean golf.

Vani Kapoor suffered a double bogey on the Par-5 sixth, had a birdie on the 15th, and another bogey on 16th in her 73.

Amandeep had her best card of the week with 71 which had four birdies and four bogeys while Gaurika Bishnoi was off color and shot 76.

Amandeep Drall stays on top of the Hero Order of Merit which is combined for both 2020 and 2021. Vani Kapoor is now second, while Jahanvi Bakshi with three wins, all in 2021, is third. Her sister Hitaashee is fourth and Seher Atwal is fifth.