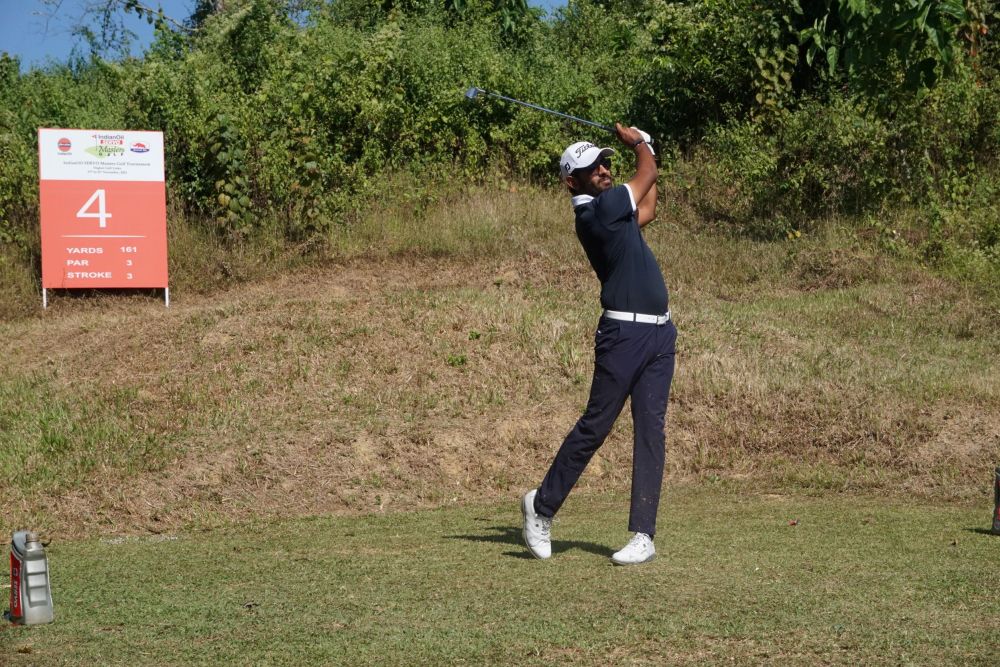 Chandigarh's  Yuvraj  Sandhu carded a superb five-under 67 in round three to take a two-shot lead at 15-under 201  at  the IndianOil SERVO Masters Golf  here on Friday Yuvraj (66-68-67), looking for his maiden win on the PGTI, came up with seven birdies and two bogeys at the Digboi Golf Links.

Om Prakash Chouhan (66-70-67), the six-time winner on the PGTI who hails from Mhow in Madhya Pradesh, also shot a third round of 67 to move up two spots to second place at 13-under 203 and be the closest challenger to the leader.

Bengaluru’s M Dharma sank five birdies and a bogey during his 68 to gain two spots and be placed tied third at 11-under 205. Chandigarh’s Harendra Gupta, a former winner in Digboi, slipped one place to join Dharma in tied third following his round of 70 featuring four birdies and two bogeys.

Gurugram’s Dhruv Sheoran carded a 68 to occupy fifth place at 10-under 206. The seasoned Mukesh Kumar of Mhow, who has a record six wins in Digboi, returned the day’s best score of seven-under 65 with eight birdies and a bogey.

The 24-year-old Yuvraj, the overnight leader by one shot, had a slow start to the day making pars on the first four holes before producing a flurry of birdies on the fifth, sixth and seventh where he came up with some great wedge shots from a range of 80 to 120 yards.

Yuvraj, a two-time winner on the PGTI Feeder Tour, then made his first three-putt of the week to concede a bogey on the eighth. He followed that up with another dropped shot on the 10th.

The 2019 PGTI Feeder Tour Order of Merit champion then made a crucial up and down from 20 yards on the 11th to pick up a shot and get his round back on track. He was then on a roll, sinking birdies on the 12th, 14th and 15th where he made a couple of quality up and downs.

Yuvraj, currently ranked 11th on the PGTI Order of Merit, being one of the most consistent performers of the season, said, “I started with a cold putter but from the fifth hole onwards I got my putter going. The birdies on the 11th and 12th were key in setting up the momentum on the back-nine.

“I knew the others were closing up on me after the turn, so I felt the need to make more birdies and press further a little to make sure that my lead was intact. I’m happy that I was able to carry forward the advantage into the final round.

Om Prakash Chouhan, lying two off the lead in fourth place at the halfway stage, struggled with his hitting at the start of round three as he was one-over for the day till the fifth hole.

However, Chouhan made amends with six birdies thereafter including three on the trot on the 15th, 16th and 17th to get close to the leader. Om Prakash, currently 14th on the PGTI’s merit list and looking for his second title of the season, chipped in on the 17th.