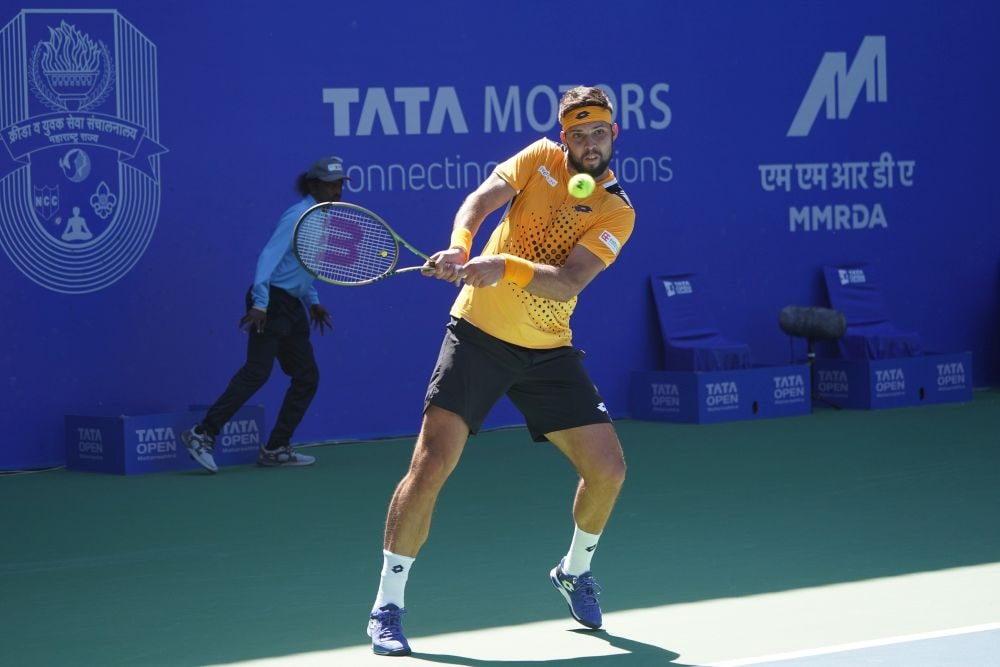 *Defending champion Jiri Vesely during his 6-3, 6-4 win against Bernabe Zapata Miralles in the singles Last-16 match at the Tata Open Maharashtra on Thursday, February 3, 2022

Indian challenge in the singles event of Tata Open Maharashtra came to an end as Yuki Bhambri suffered a 6-3, 6-2 loss against Stefano Travaglia in the singles second-round contest.  at the Balewadi Stadium in Pune on Thursday.

The Indian gave his all to stay put in the tournament, but the World No. 93 Italian maintained his control throughout the game and secured victory as well as place in the Last-8.

Earlier Sweden’s Elias Ymer sent top-seed Aslan Karatsev (Russia) packing out of the tournament beating him in straight sets to storm into the quarter-finals.

Meanwhile, the defending champion Jiri Vesely, who received an opening-round bye, started his campaign with a confident 6-3, 6-4 win against Bernabe Zapata Miralles.

Sixth-seeded Emil Ruusuvuori also had an easy outing against qualifier Vit Kopriva, securing a 6-3, 6-3 victory during a lopsided last-16 contest.

World No. 163 Ymer, , started the game well and took an early 3-1 lead against Karatsev, who struggled to find his rhythm, playing his first match at the tournament, which is organized by the Maharashtra State Lawn Tennis Association.

The star Russian, who upstaged World No. 1 Novak Djokovic on his home court to enter the Serbia Open final last year, tried to forge a comeback but Ymer showed phenomenal reflexes and resisted well with some powerful shots to level the scores at 4-4 in the second set.

Ymer then held his serves and forced Karatsev, the first player in an Open Era to reach the Grand Slam semi-final on debut at 2021 Australian Open, to a tie-break.

“I was more focussed on my serves. When you serve well, you always win matches. I think the serve was the key,” Ymer said after his match.

The 25-year-old Ymer started strongly in the tie-breaker by racing to a 3-0 lead and then maintained his fine touch to complete a sensational victory and sent Karatsev packing.

“He (Elias) played well. I didn’t start the match well and tried to find a solution in the second set to get back into the game,” Karatsev said.

The duo of Balaji and Vardhan, which made it into the main draw as an alternate pair, has now entered into the semi-finals as their opponents Gianluca Mager and Emil Ruusuvuori withdrew from the last-eight match due to an injury to the former.