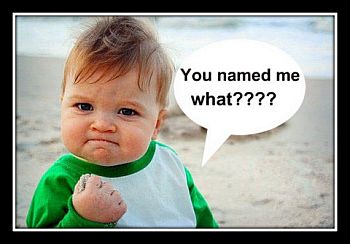 What is there in the name,you may argue.But there are many families in India who don’t want to identify their kids with their caste.

So a Raput family in New Delhi who followed a tradition to keep the title ‘Singh’ has taken up a Hindi word-‘Shiva’as title of his only son.Similarly,a Kayastha family who kept ‘Prasad’as title has switched to another title-‘Kush’.

Even in trhe Muslim families,there was a trend to keep Hindi names such as Bablu,Raju,Munna and Sonu.”This was done to keep the caste and religious identity hidden in the emergent secular fabric”,says Ramesh Kumar,a sociologist.

This was a bit different in Britain where at least three families gave the name ‘Miracle’ to newborn boys and equal number of girls were named ‘Tequila’ by their parents,according to the Daily Mail report.

“A football-mad family even decided to name their child Rooney-Scholes as a tribute to the two Manchester United footballers.

According to the records, while quirky baby names have commonly been given by celebrities in the past, families across England and Wales are closely following suit”,said the same report.