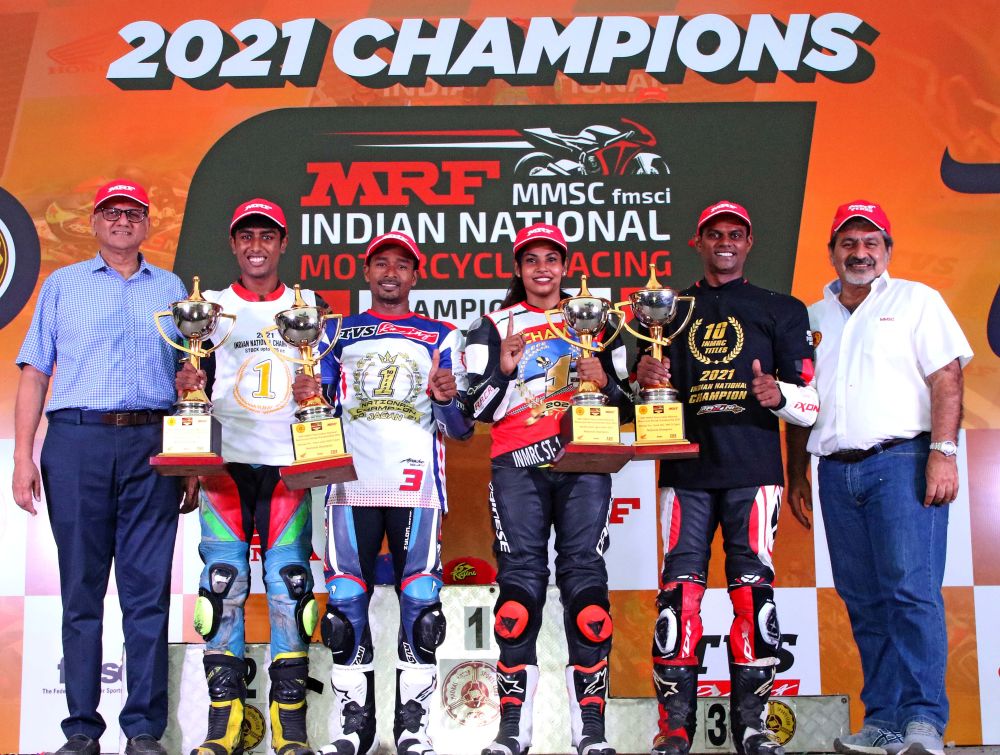 Rajini Krishnan (RACR Castrol Power1 Ultimate) claimed his 10th National title on the concluding day of the fifth and final round of the Indian National Motorcycle Racing Championship at the MMRT, here on Saturday.

The 41-year old Chennai star’s with an awesome ride finished third in the premier Pro-Stock 301-400cc category despite a crash but managed to claim the first National crown in a decade.

Jagan Kumar (TVS Racing) had assured himself of the National title, his 10th, yesterday after finishing third in the Pro-Stock 165cc category. In the second race today, he cruised to fourth. KY Ahamed led a 1-2 finish for TVS Racing with Deepak Ravikumar second, while Rajiv Sethu (Idemitsu Honda SK69 Racing) came in third.

Rajini Krishnan, who needed just four points to annex the championship going into the final round, had a roller-coaster weekend, marked by crashes in both the races. In the first outing yesterday, he crashed to finish 12th, and without a point. In the second race today, starting from P12, he moved to second but hit an oil patch on the last lap.

However, he jumped back on to finish third behind Rahil Shetty (Gusto Racing) and Anish Damodara Shetty (Race Concepts), to earn 15 valuable points. Anish Shetty crossed the finish line first, but he dropped to second following a five-second penalty for an infringement, elevating Rahil to the top step of the podium.

Rajini, who had made his National Championship debut in 2003, topped the leaderboard with 183 points and six wins, followed by Anish Shetty (164) and Rahil Shetty (156).

In the Girls category, Ryhana Bee (RACR Castrol Power1 Ultimate), also from Chennai, marked her comeback season after a year’s absence due to injury, by winning fifth consecutive race. She had sealed the championship after Round 4, but ensured that she closed the season on a winning note.

However, he finished second in the championship, seven points behind Chennai youngster Kavin Quintal who had won the first four races of the season.

Kozhikode’s Amarnath Menon took the title in the Open (Apache RR310) category of the TVS One-Make Championship with four wins from 10 starts.