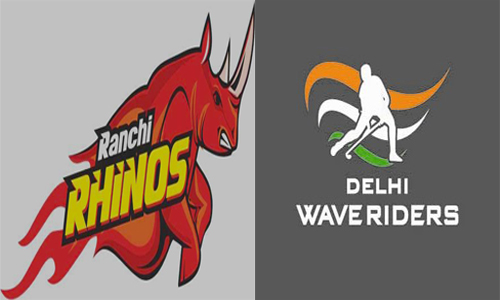 Despite goals from Justin Reid Ross and Floris Evers, Rhinos were unable to take five full points, due to a couple of own goals.

Waveriders stay on top of the table with 34 points, with Rhinos in the second position with 29. “We were not as good as we have been in the league so far. We made some mistakes today, and hopefully we would learn from them,” Waveriders’ captain Sardar Singh said.

Ranchi Rhinos drew first blood in this top of the table clash, in the 14th minute. Ashley Jackson showed some excellent skills to enter the Waveriders’ circle before passing the ball to an unmarked Justin Reid Ross. Reid Ross struck an accurate hit past a charging Nicolas Jacobi to put the visitors 1-0 ahead.

Rhinos looked like scoring another goal soon, but Jacobi made a superb save.

Waveriders’ were a bit lucky to get the equaliser in the 20thminute, when an hopeful ball from the left flank struck the foot of a Rhinos defender and went in for an own goal. Rhinos could have gone ahead the very next minute, when Prabhadeep’s fierce strike had Jacobi beaten all ends up, but the ball hit right post and went out.

The game had suddenly picked up pace at this stage. In the 33rd minute, Rhinos again had a chance to take the lead, when Prabhdeep got a free ball right in front of the goal from left. However, Jacobi was quick to dive down, and save a certain goal.

Rhinos dominated the ball possession throughout the first half, but were unable to make it count as far as scoreboard is concerned.

Start of the third half again saw Jacobi making a couple of smart saves. Waveriders had one of the best chances of the quarter though, earning a penalty corner in the 46thminute. It turned out to be disappointing for the hosts though, as the push was not stopped properly and Rhinos goalkeeper was never threatened. They made amends for that though in the last minute of the third quarter, as a long hit from Oscar Deecke was successfully pushed in by Yuvraj Valmiki.

Rhinos could have equalised in the third minute of the final quarter, but were denied by another brilliant save from Jacobi, off a strong drag flick from Ashley Jackson. Rhinos eventually got their equaliser in the 61st minute when Birendra Lakra’s brilliant pass from left found Vikas, who gave the ball to unmarked Floris Evers, who had a simple tap in to put his team on level terms.

Coach Ajay Kumar Bansal, Delhi Waveriders, said, “This draw has come to us at the right time. Every once in a while a team that has consistently climbed up should be checked so that they know the reality and work towards their goal. Having said this I would also like to mention that we didn’t play up to the mark today and not that Ranchi out played us”.

Seconding his coaches view, Captain Sardar Singh said, “We have been checked at the right time and this has come at a good stage to us. I guess the team was a little over confident that we have already made to the semis and this showed in our game and body language too”.

Coach Gregg Clark, Ranchi Rhinos, said, “It feels like a defeat even though we did play well. Their goal keeper got the man of the match but I do feel that we should have taken more shots on the goal. But I am proud of our boys and hope to do well”.

Captain Moritz Fuerste said, “We created a lot of chances today and we are really happy with our game. We did score four times but unfortunately twice in our goal. But going ahead we plan to do well and fortunately we have two games against Delhi and Jaypee Punjab Warriors at home which should be delightful.

In their next home match Delhi Waveriders take on Uttar Pradesh Wizards on 7th February, at MDC National Stadium at 6 p.m. and Ranchi Rhinos will play Delhi Waveriders at the Astroturf Hockey Stadium on 2ndFebruary at 8 p.m.