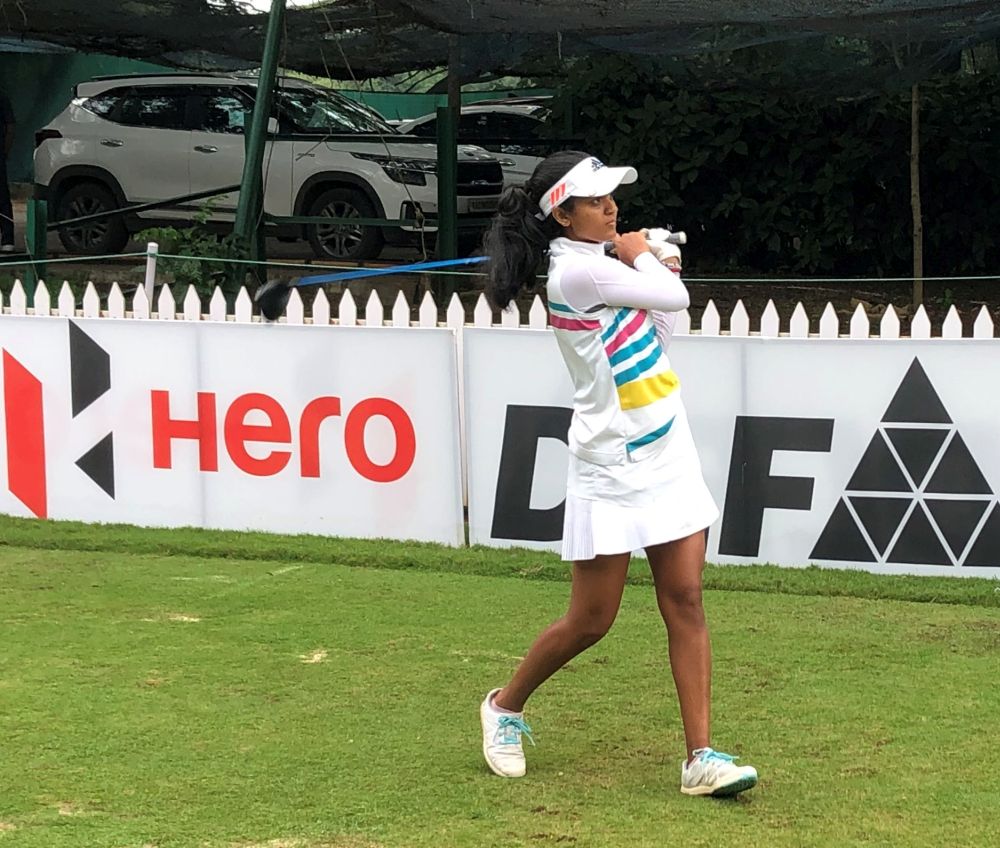 *Pranavi Urs in action at BGC

Dominating the field for the third day in a row, Pranavi Urs shot 2-over 71 with four birdies against six bogeys and totaled 2-over 209 to win the ninth leg of the Hero WPGT at the Bangalore Golf Club on Friday

This was Pranavi's fourth win of the season as she extended her lead at the top of the Hero Order of Merit.

On the final day, she moved into cruise mode just when it was most needed to hole four birdies in a span of five holes on the back nine, while her nearest challenger Seher Atwal (71) with one birdie against two bogeys, aggregated 5-over 212 to finish second.

The scoring and conditions were tougher this week as none of the players finished with an under-par total and there were only two under par rounds, one each by Pranavi and Seher in the tournament.

Starting the day with a three-shot lead at the Par-69 course, Pranavi overcame an early charge from Seher over the first 10 holes. As Seher lost momentum, Pranavi came into her own and clinched the victory by three shots despite a bogey-bogey finish.

Seher was 2-over for the front nine, while Pranavi was 3-over. That cut the lead by one. On the tenth, she bogeyed again, while Seher birdied the hole for a two-shot swing which saw the two level with eight holes to go.

However between the 12th and 16th Pranavi birdied four times and Seher managed only pars. As Pranavi bogeyed the last two holes, Seher dropped a shot on the 18th and Pranavi was three ahead, as she was at the start of the day, but by now the trophy and the winner’s cheque was also hers.

Pranavi, who feels she is fully fit and ready to go full throttle, won the first, fourth and seventh legs before this week. She was also second in the fifth and eighth legs. In short, she has finished first or second in six of the nine legs held so far.

As Seher Atwal finished second for the second time in succession, Hitaashee Bakshi, winner of third and sixth legs, was third. Hitaashee carded 72 for a total of 215.

Sneha Singh, winner of fourth Hero WPGT title as an amateur, finished fourth in her professional debut. She carded the final round’s best score of even par 69 and

The tenth leg of the Hero WPG Tour will also be held in Bangalore, but at the Prestige Golfshire from July 20-22.