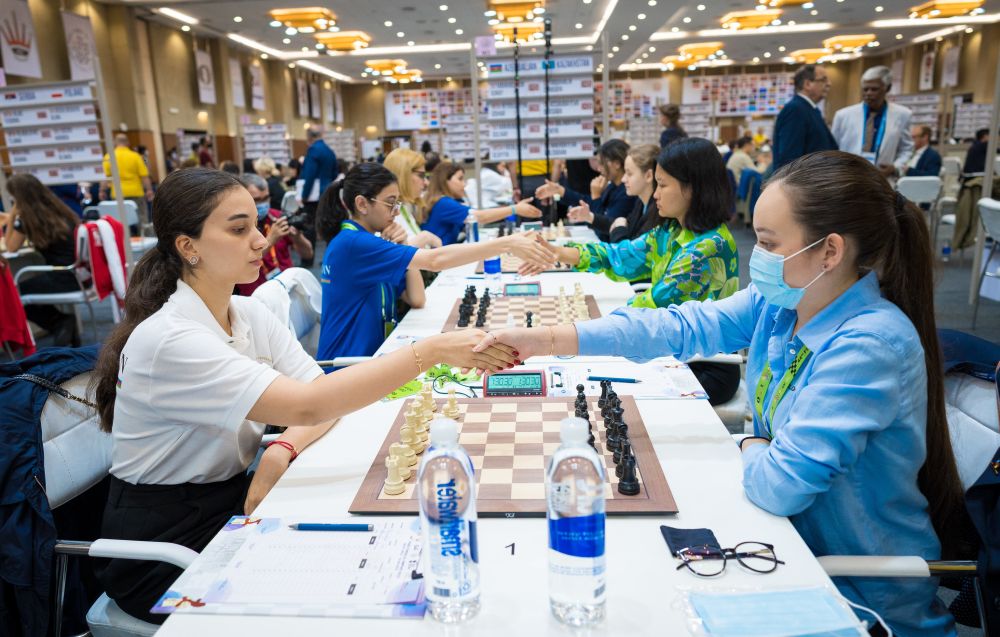 Riding on Koneru Humpy's stunning win over favourite  Nana Dzagnidze, India A defeated third-seeded Georgia 3-1 in the sixth-round match of the women’s section at the 44th Chess Olympiad here on Wednesday.

Humpy, by the middle game, was in complete command with one passed pawn pushed to the sixth and her queen, bishop, and rooks threatening to grab more material. Playing cautiously, she periodically forced the exchange of pieces and Dzagnidze resigned on the 42nd turn when the Indian’s bishop and queen threatened to win a piece.

“I am not thinking of medals at this stage of the tournament as we still have to play many more tough teams like Ukraine and so on. Our team spirit is high and whenever in need of victory, always any one player from the team would shine,” Humpy said.

Humpy, wielding Whites, later admitted that she was completely surprised by the choice of Benoni defence by Nana and played a couple of dubious moves in the Opening. Dzagnidze got a pleasant position but it soon turned ugly with some precise positional play by Humpy who got her act together.

“I am playing after two-and-a-half years and really struggled in the first few. Today too my game was long as usual, ” she added.

Vaishali and Javakhishvili battled in the Spanish Opening with the former on the aggressive side. The play was focused on the queen-side for the most part and Vaishali sacrificed a rook for a bishop on the 17th turn and netted two pieces for it. She pocketed a point after 36 moves.

“It is a very important win against Georgia, more so as we head into the rest day tomorrow [on Thursday].  Initially, there was some pressure as we were short on time but by the middle game it was fine,” team coach Abhijit Kunte commented after the win.

The team has shot into sole lead with six victories to total 12 points.

Romania, the other overnight joint leader with India and Georgia, was held to a 2-2 draw by Ukraine whereas Azerbaijan defeated Kazakhstan with a 3-1 score while Poland whitewashed Serbia 4-0

Meanwhile, D Gukesh once again produced a sensational performance as he carved his blistering sixth successive victory but his efforts went in vain as India B lost to Armenia by 1.5-2.5 in the open section.  Nihal Sarin drew on the second board while Adhiban B and Raunak Sadhwani conceded losses.

India C, registered a 3.5-1.5 win over Lithuania while second-seeded India A was held to a 2-2 draw by Uzbekistan.