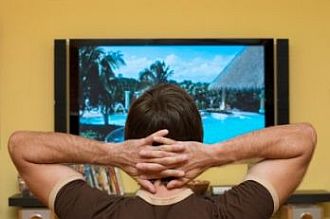 Beware!You may lose fertility if you watch TV regularly.

No joke,those guys who do not watch TV have more sperm count than those who viewed it regularly..

A pioneering research carried out by researchers at Harvard School of Public Health(HSPH) has concluded that TV watching had its impact.Those healthy men who watched TV regularly had lower sperm counts than those who did not,said the research made public by a byline story of IANS’s Deepan Chawla.

The story quotes Audrey Gaskins, a doctoral student at HSPH,a lead researcher, saying,”We know very little about how lifestyle may impact semen quality and male fertility in general.So identifying two potentially modifiable factors that appear to have such a big impact on sperm counts is truly exciting.”

“She and her colleagues analyzed the semen quality of 189 men between the ages of 18 to 22 participating in the Rochester Young Men”s Study during 2009 at the University of Rochester. The men were asked about their physical activity and TV-watching habits, in addition to health issues that may affect their sperm quality, such as diet, stress levels, and smoking.

Results showed that men who watched more than 20 hours of TV weekly had a 44 percent lower sperm count than those who watched almost no TV. Men who exercised for 15 or more hours weekly at a moderate to vigorous rate had a 73 percent higher sperm count than those who exercised less than 5 hours per week. Mild exercise did not affect sperm quality”,says Chawla’s story.