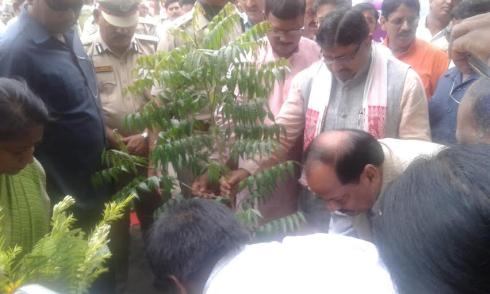 Jharkhand Chief Minister Raghubar Das on Monday inaugurated as many as 145 development projects worth Rs 444.88 crore in Maoist infested Giridih.

After inaugurating these projects,Das addressed a public meeting under the banner of ‘Garib Kalyan Mela(Welfare Fair for the Poor) at Jhanda Maidan and told the audience that the state government is consistently working to develop the state and make it a ‘strong,prosperous and self reliant state’.

On this occasion,the CM inaugurated Rs 444.88 crore worth 145 development schemes in Giridih.More,he handed over papers allowing four families whose relatives were killed in the Maoist violence to build Indira Awas for themselves.

Also,the CM gave appointment letters to 49 junior engineers and three ‘A.T.M and B.T.M’ who were appointed by the state government and deployed in Giridih.

*Picture shows Jharkhand Chief Minister Raghubar Das at Welfare Fair for the Poor at Jhanda Ground in Giridih on July 18,2016.