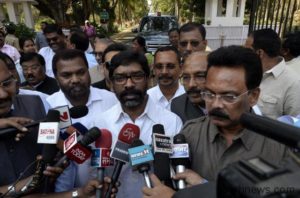 The Opposition is set to protest against the twin issues of custodial death and police atrocities in the forthcoming monsoon session of the Jharkhand Assembly beginning July 21.

The Opposition comprising the JMM and the Congress have already announced their separate plans to raise protest against the custodial deaths in different parts of the state.Among them were some sensitive cases in public domain.

Two, the death of Rupesh Swanshi, a 17-year old worker in a cloth shop,in police custody in Bundu block in Ranchi district.

Bhagat said that during the past one month as many as 28 murder cases were registered, while from January 1 to May 2016, 786 murders have taken place in the state along with 251 incidents of loot.

Even Soren had come up with these facts and blamed the Das government saying that it had failed to contain ‘police attrocities’.Both Bhagat and Soren have said that they will raise this issue in the forthcoming monsoon session of the Assembly.

Incidentally,the Das government has ordered inquiry into each of these custodial death cases and so called ‘police attrocities’.The report was awaited.