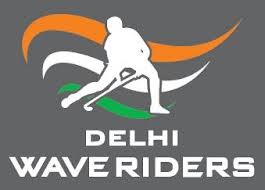 Delhi Waveriders cemented their position at the top of the points table with a 4-3 win over Dabur Mumbai Magicians in the Hero Hockey India League on Saturday.

Goals from Lloyd Norris-Jones, Oscar Deecke, Rupinder Pal Singh and Imran Khan helped Waveriders maintain their unbeaten record in the tournament at half-way stage. They have 27 points to their kitty after six games.

The game started with both teams in attacking mode, and it didn’t take Waveriders too long to take the lead. In the sixth minute, Gurvinder Singh Chandi collected a loose ball, made a good pass, and Imran Khan smacked a good low hit to the right of the Magicians’ goalkeeper to put his team ahead.

Seven minutes later, Oscar Deecke made it 2-0 for the hosts. After Sreejesh blocked the initial stroke, the ball just slipped from under the goalkeeper who had fallen to the ground, and Deecke collected the ball, and pushed it in the empty goal. Magicians were in for more trouble, as Norris-Jones scored one more for the hosts, in the second quarter. Talwinder Singh did some superb work in the right flank, and made a perfect pass to ancompletely unmarked Norris-Jones, who gently guided the ball towards the goal. Marking was a big let-down for the visitors once again in this game, as has been the case in the tournament so far.

Magicians came back to life in the 28th minute, when Waveriders conceded a careless penalty corner, and Sandeep Singh, the tournament’s highest scorer, was spot on. Sandeep got two more opportunities (both penalty corners) in the second quarter, but was denied by Waveriders’ goalie Nicolas Jacobi on both occasions.

Magicians came out with a positive frame of mind in the third quarter. However, none of their moves could yield a clean strike at the hosts’ goal. Magicians’ best chance of the quarter came in the 47th minute, when the visitors earned their fourth penalty corner of the evening. With Sandeep off the field, they tried a variation, but the move failed, as Magicians could not even take a shot at goal.

Waveriders came up with a superb counter attack four minutes later, and earned back to back penalty corners. Rupinder Pal Singh struck an absolute scorcher between Sreejesh’s legs to put the hosts 4-1 ahead. This was Rupinder’s fourth goal of the tournament, and his second against Magicians.

With a three-goal deficit, Magicians had no choice but to attack in the final quarter. Now it was their turn to earn back to back penalty corner, in the 56th minute. And Sandeep Singh found the top right corner of the Waveriders’ goal off the second, to pull a goal back for the visitors. It was Sandeep’s eighth goal of the tournament, making his position as the tournament’s top scorer even stronger.

And the 26-year-old full-back scored his ninth of the tournament soon, off another penalty corner, to complete a superb hat-trick. This time Sandeep went to the left of the goalkeeper, and the ball took a deflection before going in the goal. But there just wasn’t enough time for the Magicians to find the equaliser.

Winning Captain Sardar Singh, said,” In all our matches we start on a good note but we commit minute errors due to which we give our opponents a chance to score. The team was prepared to go all out and make this a one sided win, but due to a few errors that were committed we conceded a number of penalty corners that cost us a couple of goals. Overall our game was good. And now that we have played against all the teams in this league we have a fair idea of their strengths and weaknesses which will help us device our strategy accordingly for our forthcoming matches”.

Ric Charlesworth, Coach Mumbai Magicians, said, “With some of our players having to return home we started on a weak foot, but now we have our replacements in place and the team is trying to come together and do well in this tournament. We are disappointed with our performance today”.

In their next home match Delhi Waveriders take on Jaypee Punjab Warriors on 29th January, at the MDC National Stadium at 8 p.m. and Dabur Mumbai Magicians will play Uttar Pradesh Wizards at the MHA Stadium on 30th January at 6 p.m.