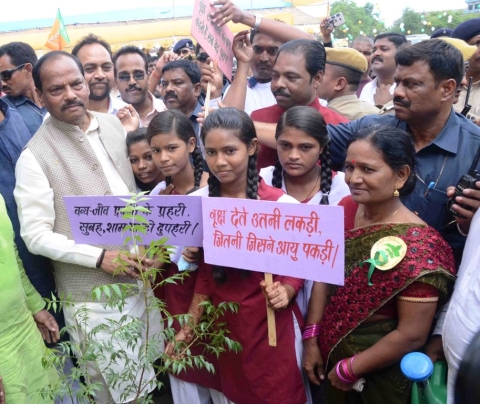 Jharkhand Chief Minister Raghubar Das on Monday declared that if the state cabinet permits,the state government and Tata Steel will sign an agreement allowing JUSCO to set up pipeline for drinking water supply in selected areas of Jamshedpur.

JUSCO is a subsidiary of the Tata Steel.The agreement will be based on PPP mode by the Tata Steel and the state government in the ratio of 60:40 respectively ,said the CM while addressing the people on the occasion of the tree plantation programme organised by the state Forest Department in Jamshedpur on Monfday.

The CM opined that any programme can take off to its logical conclusion only with the involvement of people in the form of ‘Jansahvhagita'(People’s cooperation).”Therefore,to make the green campaign a movement,the people will have to come out and support it.Since we have inherit green Jharkhand,it is our duty to leave green Jharkhand for the coming generation”,said the CM.

The CM made it clear that the incoming industries that will remove trees to set themselves up in Jharkhand will have to plant equal number of removed trees.Toward the same end,green credit system will be followed,said the CM.

The CM once again repeated his slogan-Gaon Ka Paani Gaon Me,Khet Ka Pani Khet Me(Water of the village in Village,Water of the field in field) and said in view of this campaign,the state government has already built 1.67 lakh water bodies(Dobha) and 2,000 ponds across the state.

This campaign will be taken forward and as such the plan to construct 4 lakh water bodies was ready to be implemented,said the CM.