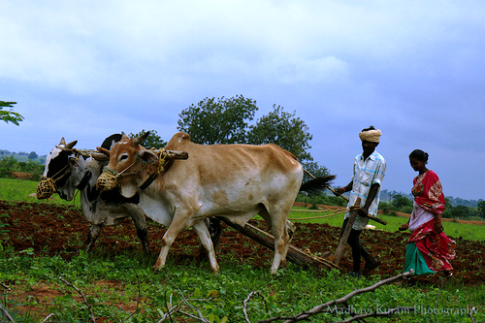 With the monsoon rain lashing Jharkhand,farmers were out in the field.They were spotted ploughing the field for initial cultivation of soil in preparation for sowing seed.

“We are very happy to have got the heavy rains on Sunday”,said a farmer in Ratu block of Ranchi district.

In fact,the ploughing is likely to continue in the coming days across Jharkhand.

The Met Dept.has noticed that the monsoon line has covered some parts of East Rajasthan including Jaipur.And over Gangetic West Bengal, Odisha and Jharkhand, a low-pressure area persists.

The low pressure area over the Bay of Bengal has moved inland.Resultantly,iIt is likely to move in a Northwest direction and it reached Bihar and Jharkhand area on Sunday.

Picture shows that while monsoon rain lashed Jharkhand,ploughing beggan for cultivation of paddy at Ratu village in Ranchi district on July 3,2016.