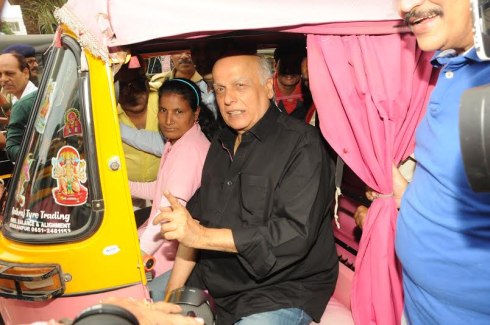 Bollywood Film Maker,Producer and Director Mahesh Bhatt on Friday moved around on Pink Auto Rickshow driven by a woman in Ranchi.

More,he took selfie with women drivers of Pink Auto Rickshaws.He had arrived in Ranchi on Thursday when he met the Chief Minister Raghubar Das.

Bhatt accompanied by actress Vidya Balan was busy with shooting of his film-Begam Jan -in Jharkhand.Nearly 90 percent of shooting work of this film is slated to be held in this state.

Bhatt also took part in a programme at the office of the Federation of Jharkhand Chamber of Commerce and Industry in Ranchi.It is located in front of Radisson Blu hotel where he stayed last night.