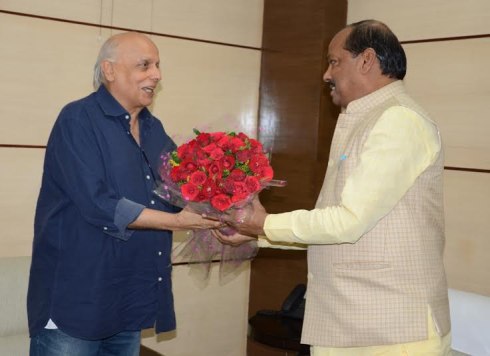 When the film Producer-Director of the Hindi film Mahesh Bhatt handed over a bouquet of flowers to Jharkhand Chief Minister Raghubar Das inside his office in Ranchi on Thursday,they appeared happy.

Das told Bhatt that the state government is planning to set up a School of Drama in Jharkhand.”My aim is to make Jharkhand as a hub of film industry in Eastern India”,said the CM.

“Many places in Jharkhand are good to hold shooting.The nature has created beautiful sites in this state.Even its people are friendly and nice.With the film shooting,local actors,artists and businessmen will get new opprtunities and jobs”,said the CM.

In response,Bhatt appreciated the Film Policy adopted by the state government.”It is a good policy.It will have positive results soon”,said Bhatt adding that in Mumbai film industry,Jharkhand has already become a subject of discussion.

“In the past,there was fear that the law and order scene was not appropriate for the film shooting work.But during the shooting of the film Begam Jan,no untoward incident took place.Here,the local administration is cooperative.If this scene continued,the films under big banners will be made in Jharkhand”,observed Bhatt.