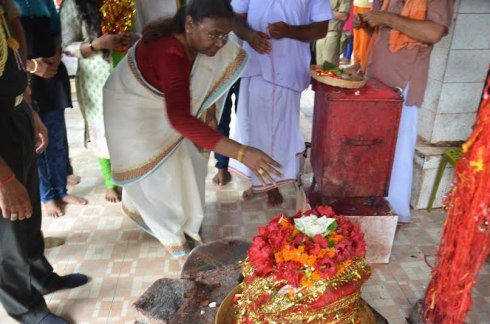 Dulmi was declared as the first free from open defecation block in Ramgarh district of Jharkhand.

In fact, during the year 2016-17, the state government has set a target to make a total of 75 blocks ODF.Among other blocks already declared ODF were Churhu, Sahebgunj, Giddor and Pathalgada.

Under the Swach Bharat Mission, a total of 3.11 lakh individual toilets have been built in the state.

Governor Droupadi Murmu,who was accompanied among others by Governor’s Principal Secretary Santosh Kumar Satapathy,UNICEF,Jharkhand,Chief Madhulika Jonathan and Padamshree Ashok Bhagat, appreciated the state government officials,engineers and other bodies involved in building toilets and said that in the past the people went to the field for defecation.

”It was compulsion.But now the Centre and the state government are committed to build toilets”,said the Governor adding that the Swach Bharat Mission was launched by Prime Minister Narendra Modi with the aim to keep the toilet inside the house so that the environment near around areas remains clean