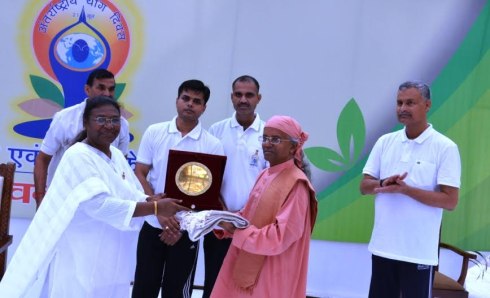 Jharkhand Governor Droupadi Murmu on the International Yoga Day opined that “Jo Kare Yog,Wo Rahe Nirog”(those who will do yoga will remain free from disease).

She said that yoga was a method to link the soul with the god.And it is a matter of happiness that yoga was becoming popular,said the Governor inside Raj Bhawan in Ranchi’s Birsa Mandap where yoga programme was held on Tuesday morning.

On this occasion the Governor Droupadi Murmu handed over momento to two yoga gurus belonging to Yogda Satsang Society who came and trained the Governor’s office staff and officers.

2.Governor Droupadi Murmu walking with the office staff and officers inside the Raj Bhawan in Ranchi on June 21,2016.