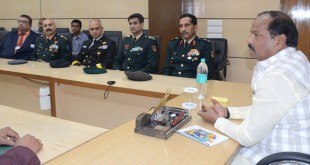 The state Cabinet on Tuesday cleared the posts and syllabus of the Jharkhand Raksha Shakti University in the making.

On January 23,Defence Minister Manohar Parrikar had laid the foundation stone of Jharkhand Raksha Shakti University and opined that strength as well as intelligence was the need of the hour to deal with cyber attacks.

More,the Cabinet approved a special provision in reservation to people belonging to the Primitive Tribe in Jharkhand.

Though it was not clear what this provision was,the Cabinet headed by Chief Minister Raghubar Das also approved Jharkhand Upvokta Kalyan Nidhi Niyamawali-2016.