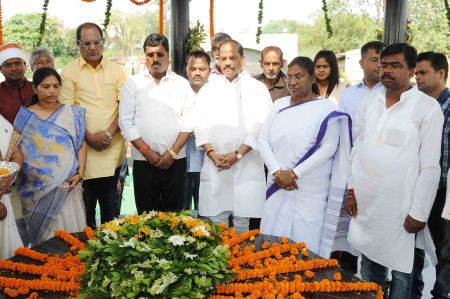 Top brass of the state government on Thursday observed 116th death anniversary of the state hero and tribal martyr,Birsa Munda.

Though born to get converted to Christianity and named Birsa David-Daud only to embrace Hiduism,he influenced many tribal people by arousing their mind-set to assert their rights on their land.

He had led massive agitations against the tribal land acquisition,propogated Hiduism,conveyed to tribals that they should learn about their history and tradition and protested against the British government and the Church.

After he was arrested,he stayed inside Ranchi jail and died there on June 9,1900 due to reasons not known.But the jail records clam that he had died due to cholera at the young age of 25.He was born on November 15,1875.

Many fold songs have been made to celebrate the life of the great warrior.According to the folk songs,he used to play in sand and dust with his friends.He who was recorded to be very sharp in study was an expert in playing the flute and used to carry an instrument made from pumpkin.

Since he was worshiped by many tribals,he was described as Bhagwan Birsa Munda.As a result,the 28th state of the Indian Union-Jharkhand-was established on his birth anniversary-November 15,2000.Now,the state government and private companies located in the state honour him by keeping his picture inside their offices.