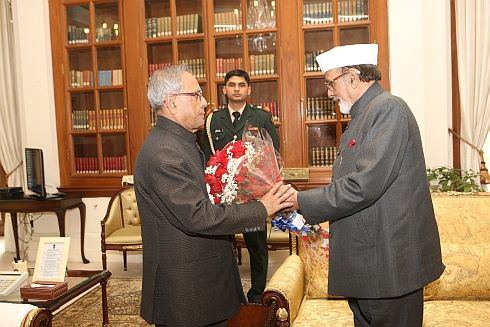 When Governor Syed Ahmad met President Pranab Mukherjee and handed him over a bouquet of roses at the Rashtrapati Bhawan in New Delhi today,gardeners of Raj Bhawan in Ranchi blew their chest in pride.Reason?

The roses were grown by them in the garden of the Raj Bhawan.And Governor Ahmad had got the bouquet of these roses made,got them packed and taken to New Delhi by flight.

In any case,after handing over the bouquet of the roses,Governor Ahmad told President Mukherjee several development and welfare schemes undertaken by the government after the President’s Rule was imposed in Jharkhand.He also reportedly discussed with him the state plan budget-2013-14.

Later,Governor Ahmad also met Union Home Minister Sushil Kumar Shinde and apprised him of the initiatives taken up by his government to deal with the law and order problem in Jharkhand.

Back inside the Raj Bhawan complex,all staff and officers led by Principal Secretary to Governor NN Sinha paid floral tributes to Mahatama Gandhi on his death anniversary today.